It's time for Plywood, where we look at construction sites so you don't have to. Seen or heard something we've missed? The tipline is always open. 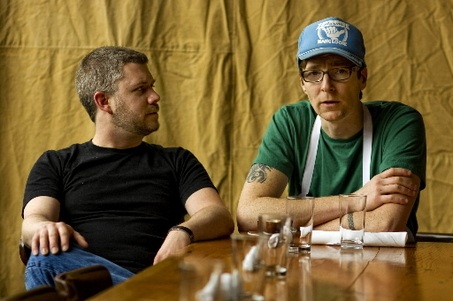 This new salumeria from Clyde Common chef Jason Barwikowski (right) and owner Nate Tilden (left) has been quietly undergoing construction in the Olympic Mills Commerce center down in industrial southeast (let's just hope they'll be nice to their Clarklewis waterfront neighbors), with an officially projected opening date of "This Fall." Well, it's mid-October and the butcher paper's still up on the windows of this thirty-seat joint hidden way inside this recently renovated office building, but we'll extend the definition of "fall" if it means Barwikowski's just perfecting his already-proven (viz: CC's freakishly good pork rillettes and surprisingly good offal ravioli) touch with the weirder sides of meat.