Saucebox or Cafe Nell: Who's On First?

Share All sharing options for: Saucebox or Cafe Nell: Who's On First?

It's Magical Mystery time here at Eater, where we throw out a question, inviting you to be Sherlock Holmes. Speculations, hypotheses, solutions? Let's make it elementary. 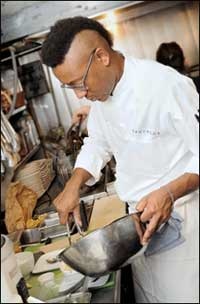 A friend stopped into Saucebox last night for a little Sunday evening potsticker wind-down, one of Cafe Nell chef Andrew Garrett's cohorts in tow, ordered the braised pork shank, and ended up with a cilantro, slivered ginger, and pickled Asian pear salad. Cohort tried it. "How long has this been on the menu?" A couple of weeks. Why? "We have the exact same garnish at Cafe Nell."

Turns out Garrett debuted his pork chop with pickled apple salad three weeks ago; Saucebox chef Gregory Gourdet, right, is on record as having spoken to Portland Monthly about his pickled apples (apples, pears -- it's the same principle)... three weeks ago. So: who was first? Was it Garrett, taking a break from breaking down a lamb? Or was it ex-New Yorker Gourdet, stopping at mile thirteen of his practice marathon to realize that the perfect fall accouterment would have to be a pickled fruit?

And could that have been what they were talking about over meat pie at Irvington wood-fired oven restaurant Ned Ludd, when they were spotted there last week, sharing a cozy two-top?