Share All sharing options for: Sydney's Shuts Doors; Web Designer Shuts Them Up

Industrial Northwest's Sydney's Cafe--favored haunt of Oregonian reporters--is shutting its doors today, and not just for a holiday break. Sydney's, being of the times, has a website. Which used to look like the above: 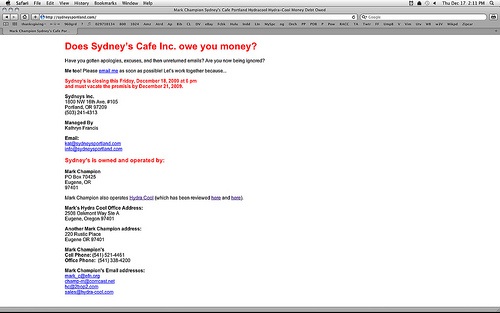 According to a web designer, David Vanadia, who recently revamped (and then, er, "revamped") Sydney's site, the coffeehouse is closing its doors today. A call to the cafe confirmed Sydney’s will shut down at 6 pm. The person who answered the phone said the “cafe had lost its lease, and that were irreconcilable financial differences between the building owner and Sydney’s owner." Sydney’s is owned and operated by Mark Champion of Eugene, Ore.

As for Vanadia, he says he hasn’t been paid in full for his work.

And he’s taken his message to Sydney’s website where a giant red-lettered headline states on Sydney’s recently revamped/hijacked site: “Does Sydney’s Cafe Inc. Owe You Money? Have you gotten apologies, excuses, and then unreturned emails? Are you now being ignored?”
Vanadia told Eater:

“The owner told the manager he would pay me but that a continued trade would be preferable because they were looking into moving to a new location close by. As the closing date began to approach, and no new location was found, I began to get more nervous. I asked for a promissory note or an addendum to our contract. It never came. In email I was told, "sorry" and "please take care" so I went to the cafe and met with the manager. I emailed the following day saying I would accept their PA system as payment-in-full (it's worth a fraction of the amount due, but I'd have something). If they would't accept the settlement offer I asked if they intend to pay me. They did not reply. I changed the website because the manager told me I am not the only one owed money. (Later) I had an email from the manager saying she no longer wishes to communicate with me and that she will call the police if I email or visit her again. I have not heard anything from the owner."


Beyond the fact that a favorite coffee haunt is closing, there is a bigger lesson to learn here: if you plan on quietly shuffling off into the sunset, don't forget to pay your web guy.
1800 NW 16th Ave. #105 â€¨Portland, OR 97209â€¨