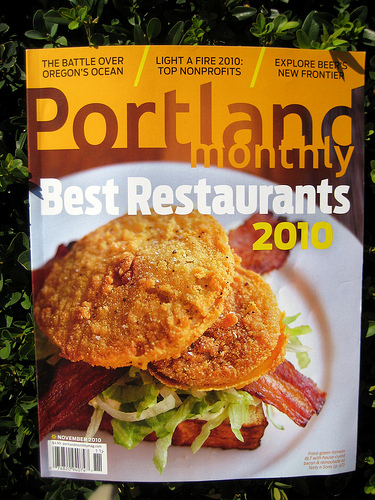 Portland Monthly's highly anticipated Best Restaurants edition, the first to be helmed by Karen Brooks, arrived to subscribers (and Eater's hot eager hands) over the weekend.

As in years past, it's still more of an authoritative round-up than an all-inclusive guide, curating only eight restaurants for full-on reviews. But what's different under Brooks' helm is that, by zooming in on just a chosen few, she (and co-author Mike Thelin) are able to take a clear snapshot of the players behind right-now spots such as Tasty N Sons (John Gorham's fried green tomato BLT gets the coveted cover), Castagna, Gruner, Olympic Provisions and Metrovino as well as surprise inclusions Din Din Supper Club, Whiskey Soda Lounge and Evoe.

Brooks adds more to the mix with her "Icon" piece (that's where you'll find Beast, Bunk, Pok Pok, Paley's Place and other notables) and Thelin also gets cheap without making cheap shots with his dining "Around the World on $25 or less."

But perhaps the biggest surprise is in Portland Monthly's editor-in-chief Randy Gragg's glowing "Editor's Note." In it he not only states, "On the history and currents of Portland's food world, there is simply no greater authority than (Karen Brooks)," but he also breaks news about Karen's other "project." Brooks is also at work on a timely tome that will detail Portland's "Food Revolution" and its current role as a gastronomic metropolis — the book will be published by Chronicle Books.
· All Previous Karen Brooks Coverage [Eater PDX]