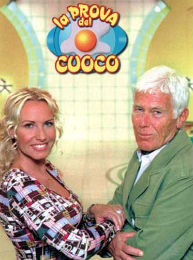 The star of a popular Italian cooking program, la Prova del Cuoco, has been canned from the show after singing the praises of his family's recipe for cat soup. The chef/food writer, 77-year-old Giuseppe “Beppe” Bigazzi -- who has been on the show six days a week for over a decade -- remarked on air last week:

“Cat soup is one of the best dishes from Valdarno.... [the cat] is kept three days in a stream to bring out the qualities of its white meat...I’ve eaten it many times and I assure you it’s a delight.”

Immediately after making this statement, the chef also said on air that he expected "racist" environmentalists would criticize his love of feline cookery. Bigazzi's Defense>>