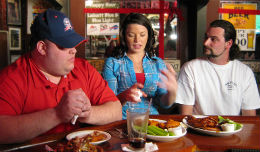 Last night, after weeks of hype, the Man V. Food Live! Super Bowl-themed special finally aired, and yes, as promised, host Adam Richman did indeed take to a 48 oz cut of beef in front of a live sea of admirers. If you missed last night's sloppy spectacle and still care about the outcome of the event, we won't mention the results till after the jump below. That being said, the most notable thing about last night's special was not the 20 minutes of live footage of Richman plowing through the gristle and fat and occasionally dabbing at his face with a napkin, Stan Laurel-style, but rather the announcement during the commercial break of a brand new food competition show from the Travel Channel: Food Wars. Everything You Need To Know About Food Wars>>>