Share All sharing options for: Best/Worst Day Ever Options, Round 3: Kenny & Zuke's and Clarklewis

While most will recognize February 14th as northwest restaurant Carlyle's last day of service before owner Bruce Goldberg wanders off to other projects and Jake Martin wanders over to Fenouil, a few will recognize it as the best/worst day ever. Yes. As it is every year, it will be Valentine's Day. With that, Eater's interested in rounding up a few options. Last week we checked out Gilt Club's puntastic plans and the "just get totally shitfaced" option. Today, it's all about the doubletakes. 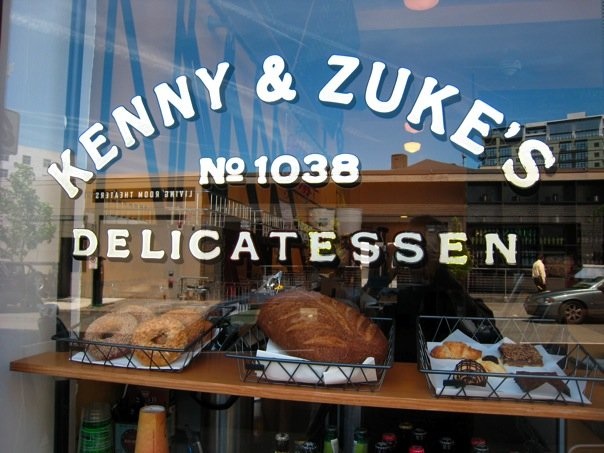 Image of Kenny & Zuke's courtesy Save the Deli

Downtown's Kenny and Zuke's--part-owned by pupusa-stalker and Eater Co-Mascot Nick A. Zukin--is offering a Cheap Date special, Sunday night only (a rare departure from what most restaurants are doing which is bending spacetime and treating Saturday as Valentine's Day as well). Why a Cheap Date, aside from maybe being one? Zukin explains it all: "Whereas most places are probably increasing their prices for the holiday, we've decided to be that place people can go if they just want a really tasty meal at a reasonable price without all the fuss. Let them save their pennies for something else -- like a present for their loved one." All together now: awwwwww.

Meanwhile, at Bruce Carey's southeast industrial district mainstay Clarklewis, (where both Tails & Trotters' Morgan Brownlow and Beast's Naomi Pomeroy--who co-founded the place with Family Supper's Michael Hebb back in the day--have logged kitchen time) chef Dolan Lane is putting together a VD (ohhhh) menu involving beet terrines and pappardelles and semolina-dusted Petrale soles which is all very lovely and the menu is in a delightful shade of violet which isn't pink enough to be obnoxious nor red enough to be classy on Opposite Day, only problem being the email announcement is illustrated with a big ol' pile of plates of asparagus. Which, as everyone who's ever eaten asparagus and then had makeout party knows, is probably about the least romantic-inclining food, ever. Which means that either Carey was snoozing (unlikely) or Lane's got a funny idea of fun.