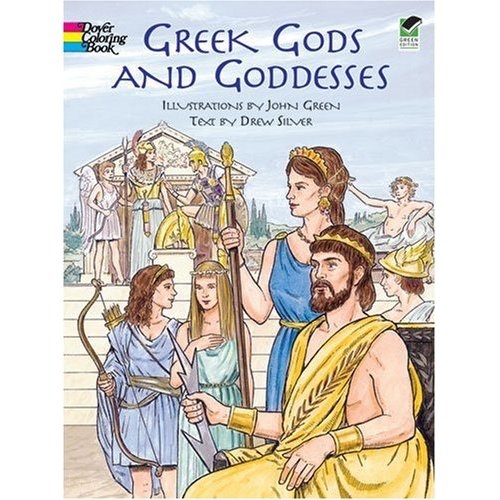 Well now! Looks like we weren't the only ones who may or may not have spent half of our childhoods coloring in pictures of Aphrodite, Argus, and Adonis in John Green's brilliant Dover Coloring Books. Or the only ones who read D'Aulaire's Book of Greek Myths with a flashlight as the sun fell over central Canada and our eyes got worse and worse until we became totally gigantic glasses-needing nerds. Or the only ones who have eaten at Jason Barwikowski and Nate Tilden's eastside industrial meat-market, Olympic Provisions, within the last few weeks.

Like Athena storming from the frontal lobes of Zeus so too does Eater Mascot and Portland Mercury reviewer Patrick Alan Coleman rock face on this week's Olympic Provisions review. Close readers have come to expect, lately, a certain je ne sais quoi in PAC's opening paragraphs--consider the mathematics of last week's, or his K-holey admission to having "a thing for cephalopods" in the week before's--but the magic, at least that particular type of magic, tends to end there. This week is different.

It seems like a typical Coleman start. Shark-jumping before the shark even got there, &c.

"Having tired of millennia dining on ambrosia, Greek gods Artemis, Demeter, Dionysus, and Hermes find themselves clustered around a restaurant table in Portland's industrial Southeast."

Adorbs. Thing is, it doesn't stop there. Oh no. Coleman just. Keeps. Going. Dionysius looks at wine bottles; Demeter likes the decor; Artemis cranes her neck; Hermes makes a joke about the slaughterhouse aesthetic. Also meat in various forms--terrine, coppa, hand pie, chorizo--is eaten. For some reason Dionysius thinks egg strata is funny, but that might just have been the bakkheia (Bacchalian frenzy, obvs.) kicking in. Demeter finds the escarole salad lacking in "zing." But they love the confit bunny--extra cute = extra tasty!--and the "bombastic salty bacon."

For once they do not quarrel over the bill. Leaving for their mountain home, they consider Olympic Provisions and decide, yea verily, the food is worthy of the name.

Mad points for getting "verily" into the Mercury. But we're left to wonder. Just who are these four, IRL as the kids these days say? If you know, let slip. But all we want to say is Patrick, honey, next time you wanna dress up in some robes and take charge of the grain, just do it. You don't need this convoluted of an excuse. (Verily.)
· Olympians [Portland Mercury]
· ColemanWatch [EaterPDX]
· All Previous Olympic Provisions Coverage [EaterPDX]
· Olympic Provisions [Official Site]