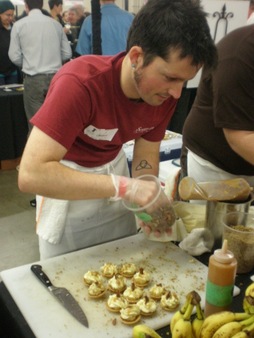 Whew. After a quick recovery from the seemingly endless supply of "bite-sized" samples, wine pours, and harsh warehouse lighting, we're ready to reflect on the 23rd annual Portland Taste of the Nation. Charcuterie, meatballs, and mini-cupcakes abound, but our three most memorable bites?

In a lowbrow-meets-highbrow concoction straight out of a Top Chef challenge, Urban Farmer drew a large and curious crowd to its "deep-fried Philly cheese steaks." Each of Screen Door's four — four! — Southern-inspired table offerings sang, especially its Bourbon-bacon crostini and the unofficial Best Dessert of the Night, the banana-toffee pie (which Garrett whips up in the photo at right). But in the best example of living up to the hype, the Jory at the Allison Inn, which trucked into town all the way from Newberg, served up the evening's best bite: A seared Carlton Farms pork belly with truffle-apple slaw. Eater kept coming back for more samples, and the gentleman manning Jory's table was nice enough to pretend not to notice. Danke.

If you missed out on the eats, you can still donate to the worthy cause by heading over to Share Our Strength's website: Remember, we fattened ourselves in an effort to make sure no child in Oregon ever goes hungry.
· Taste of the Nation Portland [Official site]