Sneak Peek at Bar Bar (and Its Burger-ish Menu)

Share All sharing options for: Sneak Peek at Bar Bar (and Its Burger-ish Menu)

Bar Bar, the brand new restaurant and bar scheduled to open Saturday during the Mississippi Street Fair — the busiest day of the year on the street — held a smallish "soft opening" on Thursday night; which just so happened to be the hottest day of the year.

Sweating it out at the VIP-ish party, where workers were still putting finishing touches on the spare space right up to the 7pm opening, parched party-goers loaded up on burgers — created by Scott Snyder and served on locally made Alessio potato buns — while quenching their thirst at the bar's bar. Seen above, it might look familiar to local beer quaffers as it was, until very recently, the thing you bellied up to at Produce Row Cafe (which also just went throw a major transformation).

Insider (TMI-ish) Info: one of Bar Bar's lemon-flavored cocktails is named for a certain folk singer who took a big pee in a green room garbage can rather than use one of Mississippi Studio's restrooms. Perhaps that's why there is a plan in the works to build a new green room, under the new Bar Bar, that comes, you guessed it, complete with a bathroom just for the bands. Check out Byronbeck.com for pics of the party... 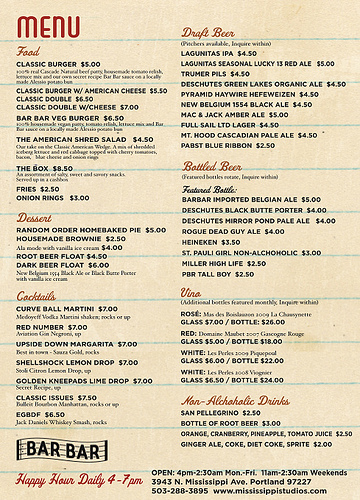