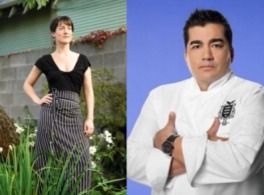 Naomi Pomeroy's upcoming Iron Chef America appearance has a premiere date: Set those DVRs for Sunday, September 12th at 10pm. According to the Food Network press release, Pomeroy takes on Iron Chef Jose Garces, who owns six restaurants in Philadelphia and made his Iron Chef debut in January 2010. The secret ingredient, sadly, will remain a secret until the premiere, but in the meantime, feel free to tide yourself over with the best video ever made.