This is the Plywood Report, where we fill you in on what's coming up in food. See anything happening in your neighborhood? Let us know. 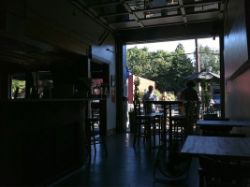 BUCKMAN/BELMONT: The SE Belmont space recently vacated by the Globe already has a new tenant: Liquor license paperwork reports that the Conquistador Lounge, a "full-service restaurant and bar open daily from 3pm to 2:30am." Menu's described as Spanish, Latin, and Mexican, and the spot appears to be owned by Casey Maxwell, who also owns and operates the W. Burnside dive the Matador (not to be confused with the Mexican bar/restaurant chain Casa del Matador). Matador/Conquistador... we're sensing a theme. [EaterWire]

DOWNTOWN: Celebrity food cart alert! Kinda. The Merc reports that Portland Timbers midfielder Sal Zizzo is currently working on an "authentic Italian"-inspired food cart in the SW 9th and Alder pod, inside the cart that once housed Loco Locos Burritos. Zizzo's FC (which apparently stands for Zizzo's Food Cart) has yet to reveal its menu or projected opening, but already has a couple hundred followers on Facebook. [Blogtown]

W. BURNSIDE: A tipster reports that a new seafood establishment, Poseidon Seafood Bar & Grill, is in the works inside the W. Burnside space that was once home to the Cabaret strip club. According to this Craigslist post, they're still looking to hire "waitstaff, bartenders, cooks, and dishwashers"... and plan to open this Thursday. [EaterWire]

Image of the Globe courtesy Jodi V. via Yelp