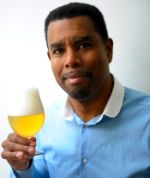 Brooklyn Brewery brewmaster Garrett Oliver, who most recently/notably edited the Oxford Companion to Beer, chats with Gothamist in a lengthy interview about everything from the resurrection of craft beer to picrotoxin to what he claims is the worst beer in the world: "I drank a beer when I spent a day in East Berlin, and I thought, 'Boy, Communism is certainly bad but I didn't know it was so bad that it could even make Germans produce terrible beer.' And it had." [Gothamist]