Dr. Sushi is "In" for Riffle's Ken Norris & Jennifer Quist

Share All sharing options for: Dr. Sushi is "In" for Riffle's Ken Norris & Jennifer Quist 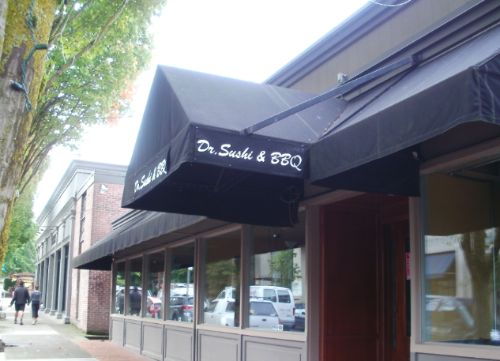 Since moving from NYC to PDX just a few months ago, married chefs Ken Norris and Jennifer Quist have been busy working on their upcoming restaurant Riffle NW, a casual fish-centric restaurant where the menu is said to be catch-inspired and sustainable. When they're not testing recipes of their own, you'll likely spot them immersing themselves in Portland's thriving food scene, including another newbie to NW 23rd. Says Norris:

My wife Jennifer and I moved to Portland nine months ago, and part of opening up a new restaurant is doing our fair share of "R&D." We're on a mission to try everything... seriously. We live in the Nob Hill neighborhood, so when Dr. Sushi & BBQ recently opened on NW 23rd, we had to give it a shot. With a name like that, it's hard not to be intrigued. The menu is huge (we joke that it could almost be considered the Epcot Center of Asian cuisine). We've genuinely been impressed with each time we've been there — and continue to go back. The "Dr." is always in the house, directing staff and talking with guests. It doesn't matter whether you are manning your own Korean 'cue station, savoring the beef bulgogi and kimchi, or taking a seat up at the sushi bar, the dedication to the food and flavor is clear. Another bonus is being able to enjoy and share with friends when having the Shabu Shabu at the hotpot table, or the Grace Combo for 6 people at the barbecue—our favorite type of meal to have... though I always get some sea urchin sushi and hoard it for myself; generosity only goes so far. Our tip: Ask for the hottest "staff chili sauce," and proceed to some good times with tall beers and quarts of Sochu.