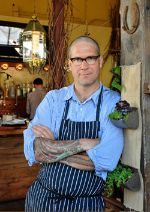 In a lengthy interview over on the mothership, Eater National chats with Ned Ludd chef/owner Jason French about his career trajectory from New York ("It was very much the '80s, going down to have a slice and sitting next to the guys from Quiet Riot") to Colorado to Portland — which, for the record, was still the cool place to move in the early aughts. And about that famous wood-fired-oven-only kitchen: "I believe that if you find yourself within some limitations, it poses a more thoughtful approach to cooking," French says. "I'm not about establishing a strict set of rules, though. At the same time, I've yet to feel like, "'God, I'd really love to make some fucking french fries.'" [Eater National]