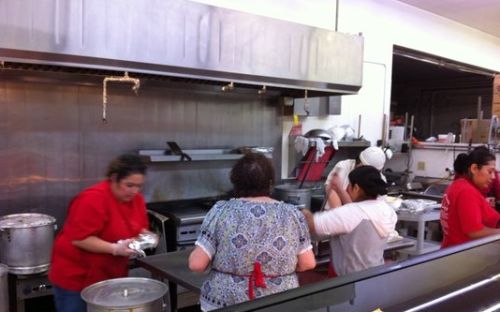 Rodney Muirhead is a graduate of the French Culinary Institute in New York City, an alum of Danny Meyer's Eleven Madison Park, Apizza Scholls, and Nostrana. At Podnah's Pit, however, Muirhead turns pitboss, focusing on making the traditional barbecue of Texas with a nod to Eastern North Carolina — and, oh yeah, the BBQ spot just won Willamette Week's Restaurant of the Year 2011. So where does the award-winning Texan go when he wants to get his grub on? Here's what Rodney had to say:

My tastes lean towards simpler things done in a traditional way but done
as perfectly as possible. So, when I want a great pasta I know that Nostrana is going to deliver the most perfect dish outside of Italy and when I want a burger I know that Pause is going to give me a freshly ground perfectly cooked burger with great french fries. But there is a craving I get that makes me jump straight into my car and drive to Gresham and that is Tortilleria Y Tienda De Leon's. There are a few ladies in the back of the store making traditional guisados, carnitas, beans, rice, and tortillas. I always get a combination plate which includes rice, beans, whichever guisado looks best to me that day, and a stack of corn tortillas. The owners are extremely nice and I was happy to learn one day they are also from Texas.