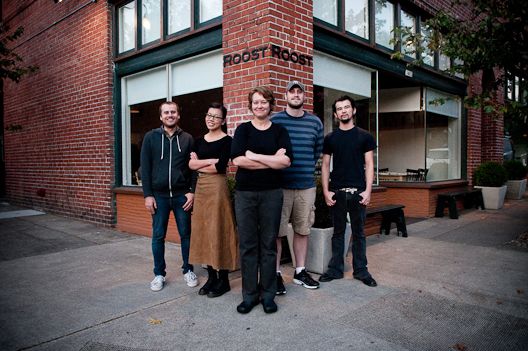 When chef and recent New York City transplant Megan Henzel moved to Portland last year, her narrative seemed custom-made for this food-focused town: Having trained with Julia Child, Henzel, a private chef, had moved about 16 times in 20 years, working for Fortune 500 CEOs "who were like, ‘I need this tomorrow and I need that yesterday,'" she says now. "I would be in New York, I would be in LA, I would be in Santa Barbara." When Henzel's casual yet refined spot Roost opened in September of 2010, early reviews praised the food but tended to focus on the sparse space — a perception Henzel says her staff still deals with daily. Eater recently chatted with Henzel about the restaurant's DIY ethos, its "slow-and-steady" hype accumulation, and the fact that "we're doing better than I think people think we are."

How did you find this space?
It was pretty quick. I was actually on a vacation with a friend from New York. We met here, and she was going to move out to open it with me. Things changed — she got a big client — but at any rate, we drove by here and went, 'Oh, that place would be perfect.' The paper was up, so we thought somebody already got it. I came back three months later, and a sign was in the window with a number. I got it. [That was] January of last year.

It was a pretty quick build-out, then.
I always knew what I wanted. My favorite restaurant is St. John in London; [co-owner Fergus Henderson] trained as an architect before he became a restaurateur, and his space is basically what I wanted. I don't like a lot of clutter, I wanted it very minimal. I wanted people to be able to converse and come into a friendly environment that doesn't have any hype, any predisposition. I remember it was a very DIY process. Oh, yeah. I had my niece and nephew painting the chairs, my parents were here spray-painting the lacquer. I did the bar, sanded it. I had to be involved; money matters-wise, you have to be smart. You look at the numbers that go, 'I've got to do it myself.' But also, as my first project, I wanted to do it on my own. I've never built anything, I wanted to learn the process so the next time you do it you can be smarter and quicker. I wouldn't change anything that we have design-wise — [except] the placement of my garbage can and the placement of my heating system. But other than that, everything else fell into line. I came in and it was gutted, thank god. I mean, we found needles in the walls — it was pretty nasty.

How would you describe your cuisine?
I spent so much time in New England, so it's definitely from that. New England comes from England, same thing: bread puddings, the mayonnaise, that type of thing. Did Portland influence you? Portland is the same as it is anywhere... There's nothing really unique about the Northwest except maybe cedar-plank salmon, because nobody else is doing that. But you look at a pork dish here and a pork dish in France, it's the same thing, really. So, I would say probably not. [But] the ingredients here are phenomenal; we have great product. I don't think you can say that about a lot of other states.

What about diner expectations in Portland? Is it different from other cities you've cooked in?
I think New York is more about the hype of it. San Francisco is clever; they're very smart diners. They know their food, they know instinctively what's proper in a sense. Portland, I think you have that [SF] crowd. I talk to our customers, and a year in, they're calling and asking, 'Is this dish back on the menu yet?' That says a lot, to be able to say they've tried this once and want to know if it's coming back. I'm proud of that.

So how did the opening go? Any surprises?
It went brilliantly. I like the slow-and-steady. We don't get a lot of hype, we don't get a lot of press. We have this strange thing with San Francisco right now, we have a bunch of people that come in from San Francisco, so that's funny. We just kind of let it happen. There are nights where, no question, it's like, 'All right, nobody's walked through that door today.' But that's the business. It's been great.

Your early reviews seemed to focus on three things: That the food was good, but the space was too minimalist and that the restaurant was always empty. How did you react to that?
We still react to that. We still have customers that pull out waiters aside and say, 'Why aren't you guys slammed?' We've all gotten to the point where we're like, 'Whatever. It is what it is.' And the fact that we're here 13 months later, we're in the black, we're doing better than I think people think we are. So, we're good.

Have you made any changes since opening?
I don't have any regrets for what we did. Our menu is still the same idea, same focus. Staff changes, which happens. I'm thrilled with my staff right now. It's all really quite good. I think we could use 5-10 more people a night, but we're paying our bills. Right now, it's good. No adding happy hour anytime soon? We don't really have that crowd. We flirted with that in the beginning, but our demographic really is 35 and above. The people that have complained the most to us or online have always been a younger crowd where they don't get it. They need a sexy bartender, dim lights, and a disco ball. We're obviously not that at all. Happy hour just wouldn't work for us.

Do you have regulars, brunch or otherwise?
We do. And I like that my waiters say, 'We love our customers,' which you rarely hear at a restaurant. I get managers from other restaurants here, and they're like, 'Ohhh you won't believe what happened last night' — we don't have those kind of conversations at the end of our night. But we never have conversations about 'Did you see that asshole at table four?' And it's so refreshing. I'm very proud of that.

So 13 months in, are you committed to Portland long-term?
I'm here. Absolutely... It's a good spot, it's a good feel. I'm tired of moving. I think I'm done. And has it felt like a year? No, it's [been] crazy fast. By Sunday night, I've worked 80 hours in week, so by Sunday night I'm either crazy or laughing — you're so tired, you don't know what to do. But it's been great, it really has.
· Roost [Official site]
· All Previous Roost Coverage [Eater PDX]
· All Previous One Year In Coverage [Eater PDX]