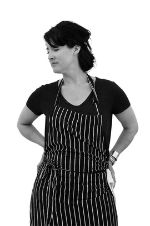 As part of a Portland Monthly series that "Explore[s] the Genesis of Innovation," Beast chef/owner Naomi Pomeroy has been named to a prestigious list of 12 Oregonians Changing Our World. In the accompanying story, Pomeroy talks about her inspirations (among them, her single mom, Alice Waters, and Burmese pro-democracy activist Aung San Suu Kyi) and gives a quick two-minute tutorial on how to properly salt a salad. And as part of the "Brainstorm" series, Pomeroy will appear with two other Oregon innovators during a live conversation at the Bagdad Theater on October 10. Tickets for the latter available here. [Portland Monthly]