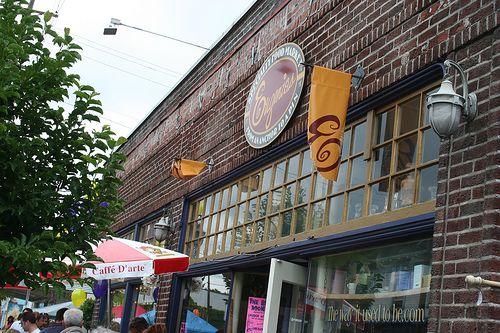 Growing up, Cheryl Wakerhauser planned on becoming an astronaut, but ended up a pastry chef. The space program's loss is definitely Portland's gain, as Wakerhauser is now the owner and operator of the sweets-obsessed Pix Pâtisserie. With two locations — one on SE Division Street and the other on North Williams — it's not much of a surprise that Cheryl doesn't have a lot time to wander our local streets (she saves that for her annual month-long sojourn to France), but when she does, she always finds inspiration. And one of her most inspired finds is not that far from Pix Southeast's front door.

The first time I walked into Eugenios on SE Division Street I looked down at a glass case with colorful swatches of fabric. I said, "What's that?"; [owner] Eugene replied, "That's the Carpet Sample Museum." From that moment I knew Eugenios was one of a kind. The carpet museum is long gone — they needed more counter space I guess — but the same funky, quirky atmosphere still exists. "Corked Wine, Warm Beer, Lousy View!" is prominently written on the wall, but that statement is far from the truth. Eugenios has a nice little selection of quality beer and wine and serves 10-inch pizzas and tasty sandwiches such as the Ultron Get-A-Long (a meatball sandwich with di carlo sausage and ground chuck, marinara, mozzarella). The place has recently expanded into the space next door and hosts live music and an open mic. This is my ideal neighborhood spot to sip Château Miraval Rosé at just $7. Did I mention they have Champagne? The real stuff, not $5 Cava. You won't find 20-something hipsters shooting Fernet at Eugenios. You will find a great glass of wine at an affordable price in an inviting neighborhood atmosphere (and the view isn't lousy, it's just Division St.) See you there?

Paley’s Place has closed, Roe has transformed into Tercet, and more Portland spots that have shuttered permanently