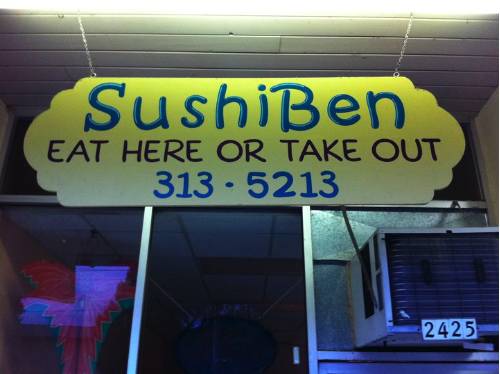 After getting her culinary degree, Danielle Pruett landed in the kitchen at Eugene, Ore.'s Marche, where she spent two years baking, followed by two years as the restaurant's pastry chef. After all that time in Eugene, Pruett decided it was time to high-tail back to her hometown. Back in PDX, Pruett worked as the pastry chef at Clarklewis before joining the Clyde Common team a few months after their opening. She's been their pastry chef for more than four years, and when Pruett's in the mood for something other than dessert, she heads to a SE neighborhood sushi joint.

"I rarely eat animal products outside of work, but periodically I get a craving and I typically end up at Sushi Ben on SE 26th and Division. Inside is an entertaining, decorative mix of purple and green sheer fabrics, Japanese decorations, numerous pictures of a dog and a cat at the sushi bar, and plenty of updated reading material. The owners are a Japanese couple that speak very little English and work quietly together in the kitchen. There's nothing fancy about Sushi Ben's menu. I always get the spicy tuna or spicy salmon roll, and I never share them. They are small with more fish than rice in them, which is refreshing after all the giant sushi rolls chock full of rice that I see at a lot of places in town. I recently tried the fried tofu udon soup. It was straightforward, but somehow I haven't been able to stop thinking about it and its robust and homey broth. I also get the teriyaki tofu and vegetable bento. Sushi Ben makes it into something awesome with piles of vegetable, perfect seasonings, and their typical clean-fresh taste, without excess oil. Plus when they hand you your food, it's always accompanied by a bow and profuse "thank you's." Apparently their son uses the space late-night for Chix Stix. My friends are big fans of Chix Stix, but its hours don't work as well with my bakers sleep schedule, so I'll stick to Sushi Ben."