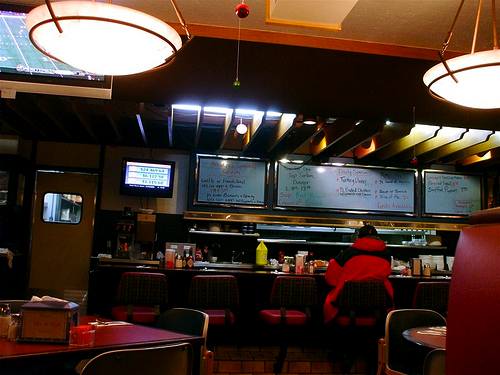 Katherine (Kat) Whitehead met her husband Jasper Shen at 5 Ninth in New York City, and together with chef Sarah Pliner, the duo made the cross-country move to Portland to pursue their dream of opening their own restaurant. The result — the acclaimed Aviary— has since suffered a temporary shutter (thanks to some Fourth of July fire damage), but the ongoing rebuild hasn't stopped Whitehead and Shen from visiting their favorite spots, including one overlooked establishment in North Portland. Whitehead gives Eater the inside look:

"My favorite under-the-radar place is the Overlook Restaurant in North Portland. It's this incredibly divey Greek diner. You have to sit in the lounge; it's got indoor fire pits, neon lighting and old bikers drinking cocktails with their eggs and playing video poker! We go there for a late breakfast on Sundays and there's never a wait, which is nice in a town of two hour brunch lines. I can't actually say whether most of the gigantic menu is any good, because we always order the same things: I think there's just something about diners that makes you crave the comforting and familiar. My husband Jasper gets a ham-and-onion omelette, and I get either the veggie omelette or a short stack of pancakes. The omelettes are typical diner-style: an enormous fold of well-done eggs with hash browns and toast. The pancakes are the size of the plate and very fluffy, perfect for soaking up the fake butter and syrup. It's not sophisticated; it's frumpy and old fashioned. It is comfort food before it got cool."