Share All sharing options for: Trillin Cooks Higgins. Not Literally. 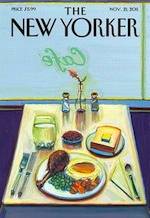 Apparently, a couple Portland stalwarts make an appearance in the New Yorker's annual food issue: Journalist/food writer Calvin Trillin files a piece about his go-to recipes when he's cooking in Nova Scotia (what a life), and he devotes the final few columns to a salmon hash recipe by Greg Higgins (described as "instrumental in the development of the new Pacific Northwest cuisine"), name-dropping Karen Brooks in the process. The moral: Despite putting off trying Higgins' recipe for a few years ("at first glance, it seemed complicated"), Trillin makes the dish at the urging of his daughters. He also really, really likes to cook seafood. Good to know. [New Yorker; subscription only]