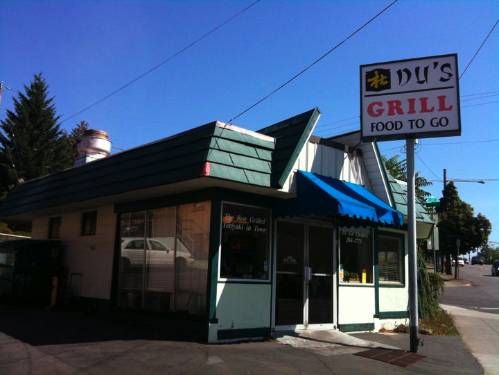 Linda Addy is the managing partner/general manager of the seafood-centric Salty's on the Columbia, but eaters may also know Addy and her husband Cameron from the Northeast neighborhood favorite belly restaurant (which closed in April of this year). The working parents find it a bit more of a challenge, though, when they look to satisfy the needs of both themselves and their child. But one Northeast teriyaki outlet fits the Addy brood bill just fine. Here's where Addy goes when she wants family food — fast.

As the parent of a four-year-old, I learn quickly where to find good eats that can be at the table quickly. At the corner of NE Sandy and 53rd, Du's Grill has been cooking for 15 years. The smell of the grill greets you as you enter the small space of six tables that are always seated with fellas with big appetites on their lunch break and a fair mix of PDX hipsters texting as they wait for their to-go orders. Order at the counter and you'll see the simple, efficient set up of grill station, prep station and the guy with the huge cleaver that slices whatever comes off the grill. The counter is usually ran by someone in the family of the owners, and it's really quite impressive to watch the talent of multi-tasking as they answer to-go orders while plating an order while running the register while smiling at my kid and getting someone extra sauce. The menu is simple, with nine enormously portioned entrees, most served with rice and salad. But the star of the show is the chicken teriyaki. If you call ahead for take out, your order will be ready literally in five minutes — so don't call ahead too soon.