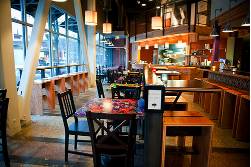 SEATTLE: While Portland has enjoyed an insane flurry of early winter openings, our neighbor to the north also has a few new spots worth flocking to: Chino's, a Mexican-Taiwanese restaurant with a pedigreed bar manager, debuts in Capitol Hill this weekend; Bitterroot Barbeque , coming soon to Ballard; and a Seattle-based outpost of the 8 oz. Burger Bar has set a December 12 opening date. Also, Facebook fans of this place created a "cake-sized" burger made of seven burger patties, because why not. [Eater Seattle]

SEATTLE: Seattle Met's blog reports that Seattle celeb chef Tom Douglas ('round here, he may be known as that guy who showed up in Pioneer Square in the Macy's food truck) will hold monthly pop-up dinners within his 12-spot restaurant empire, each featuring the cuisine chosen by a different chef employee. In one upcoming dinner, "executive chef and James Beard winner Eric Tanaka is planning a pop-up dedicated to 'all things balls.'" [Nosh Pit]

WILSONVILLE: The Oregonian reports that a burgeoning burger chain titled The Original WOW! Burger will debut next week in Wilsonville, and the spot marks the first of what owner Craig Knouf hopes will be several restaurants. Per the article, "Knouf said he'll open another at Cascade Station in northeast Portland in about two months and at Fisher's Landing in Vancouver in March." [OregonLive]