Share All sharing options for: Grain & Gristle's Meyer & Ganum on Year One

Welcome back to One Year In, a feature in which Eater sits down for a chat with the chefs and owners of restaurants celebrating their one year anniversary. 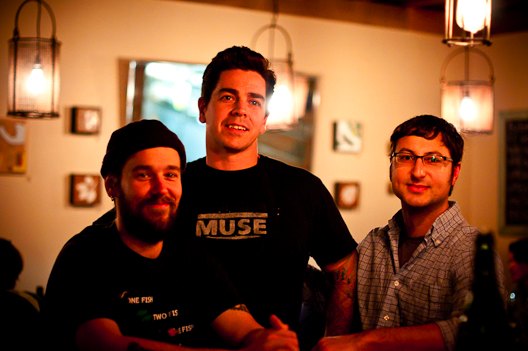 Last fall, Ned Ludd co-founder Ben Meyer made headlines when he left to open a new beer-focused venture, partnering with Alex Ganum of Upright Brewing and Marcus Hoover of Roses Equipment to create the NE neighborhood spot Grain & Gristle. "We bonded through food and drink, like anyone else in this town," Ganum says of the pair's first meeting, which happened just before Upright officially opened in 2009. Eater stopped by during a recent dinner service to talk about how the partnership came together, future expansion plans, and yes, that "contentious" moniker.

You guys had known each other for a few years and worked on beer dinners... but when did the idea of Grain & Gristle pop up?
AG: I'd always liked the idea of having a pub, because my place is just a production brewery. But I always felt overwhelmed; there was no way I was going to take it on by myself. But then [Ben] came to me with the idea, and I thought about it for five minutes and thought, "This is a pretty good idea."
BM: I had been mulling over — Ned Ludd, when we thought we opened we thought we were going to be more of a neighborhood place, but the nature of the beast decided what it wanted to be. And the beer was taking a back-seat. I decided I wanted a beer-focused place, and it didn't take me long to realize the things Alex was into with food and beer and the things I was into would really go together.
AG: We see eye-to-eye in a lot of things in a business sense, which is the trickest thing to find in a partner.
BM: The three of us really complement each other well. I think we could have five more businesses within this threesome and we could all make it work without killing ourselves.

Is that part of the plan?
BM: Yes.
AG: Certainly. Not necessarily something exactly like this, but we'd like to do more stuff, there's a lot of stuff we want to do. Similar but in different directions.
BM: And whatever we open, they'll all work off one another. We're really busy in here with a small space... It would be nice to have a little neighborhood pub that wasn't as focused on the food. It all depends on what comes up, what space, and what we want. When we opened this, it was because both Alex and I within a stone's throw and there was a lack of this. We went looking for the space to do it, and this space fell into our laps. It was the right space at the right time. This was the second space we looked at. It just worked out.

So you're not actively looking at this moment for project number two.
BM: We always have our ear to the rail to see what comes along.
AG: We're not in a rush. We know we want to do some more stuff, but we're not like, "We're doing something in six months."
BM: We're not going to open another Grain & Gristle in another neighborhood.

Tell me about the build-out here. Any unexpected problems?
AG: There were a lot of unexpected carnitas in a lot of different corners.
BM: I ate here twice [in its former incarnation], and during the build-out, I could have found them and assaulted them for some of the things I found. We did more work than we envisioned — one of the things I didn't like about the space was how low the ceiling was... what I wanted was to open it up and allow the character of the building to shine. We had to do a lot of work in the kitchen to clean it up.
AG: I think I brought some of the chemicals from the brewery to get through some of that.
BM: It was not in great shape when we took it over.

Let's talk about the name.
BM: We wrestled a lot with the name, and it's been contentious all the time. I remind people that contention is really good, because you always remember it. We were going through a lot of names, and it was Alex that said, "I think it'd be good if we found some string that connected the three of us, a brewer, a butcher, and a cabinet-maker." And grain was the one thing that went through all of those trades. We threw out Grain & Gristle, and it stuck.

Do you remember what some of the reject names were?
BM: Actually, this was really odd. Our OLCC name is the Guild, because we were originally going to call it the Guild Public House, and within a few months of us opening, the Guild [on East Burnside] opened. Another name that we chose — and we actually had imagery for it — was the Woodsman's Wife. That was the working title until very close to opening. And months after us opening, I was talking to Eric Bechard about maybe doing a project together, and he said, "I've already got the name and logo and everything — it's going to be called the Woodsman." And weeks later, [The Woodsman Tavern] was announced. There are themes that just carry on... that's the hard thing, coming up with something that resonates with people but doesn't seem concepty or cheesy.
AG: I like the fact that the Gristle part sort of pisses some people off. It has some edge to it, for sure... I think people are really reluctant to throw down some personality. And that's okay. You don't have to make everyone happy.

Ben, being so closely tied to Ned Ludd, were you worried in the beginning about differentiating the menu here?
BM: Well, there was the obvious limitation of price. We don't have anything on our menu over 11 bucks, but at 11 dollars there are certain proteins that are off the drawing board... so there were a lot of things that just naturally weren't available, which differentiated it somewhat. And there were certain things I knew would be static on this menu — Ned Ludd is a contast flux, everyday the menu changes — and I knew this one was going to be static for a month at a time, and things we would have year-round. There were a lot of things that translated straight across that work beautifully in this setting. Then there were things I was excited I could do here because I had a full kitchen — like pork rinds.

So think back to that first week: What was the mood in here like?
AG: I just remembered some shit I tried to forget — how fucking broke we were when we opened. And by broke, I mean broke. I forgot about that.
BM: We were really fortunate that [between] whatever buzz there was around what we were doing, and that the neighborhood was really excited to have a place, pretty much from day one we were busier that we thought we'd be.
AG: Our business hasn't really changed all that much. We've been really steady since we opened, which is the best thing about having the neighborhood joint, without a doubt.
BM: There were some serious growing pains — there were things we didn't design in that we had to figure out as we were going along... We go through a lot of beer, and we didn't really account for enough space for empty kegs and kegs coming in. One little cooler has all of our food — and that includes whole animals — all of the beers, and for most of those, a beer waiting to go on when that one blows. It's never empty. Once the farm season really kicked in, we built a shed behind the restaurant that can house a couple reach-in coolers just for farms to drop. We got another freezer, we got another space out back for dead kegs to be stored. There were things off the bat that, being busy immediately, we had to hit the ground running and figure out.

So, final question: Does it feel like it's been a year?
BM: [long pause] I actually feel like it's been longer than that. It still feels really young, but the lion share of our staff has been here since the beginning, and I feel like we're pretty worn in and established in what we do.
AG: Yeah. We opened in winter of last year, so we've been through that seasonal deal, which makes it feel complete.