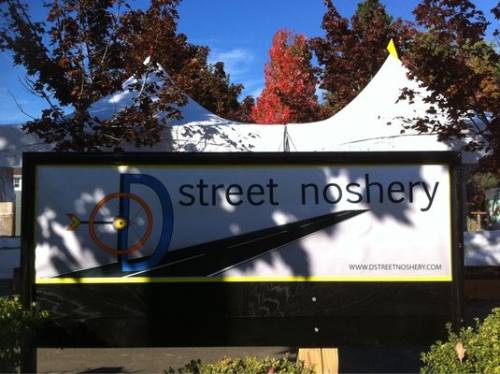 Image of the D-Street Noshery courtesy Michael K. via Yelp

Q: What was Portland's best dining neighborhood in 2011?

Allison Jones, Portland Monthly contributing food editor and Eat Beat blogger:
Gotta be Division (especially if you throw SE Clinton into the mix, which I would). You've got Sunshine Tavern, Wafu, Woodsman Tavern, Mi Mero Mole, St. Jack, the D-Street Noshery cart pod, Portobello... and it's only going to get better in 2012.

Brett Burmeister, chief food cart enthusiast, FoodCartsPortland:
When visitors come to down and ask where they can get a variety of meals, I send them to SE Division and Belmont to the food cart pods at D-Street Noshery and Good Food Here. These two lots comprise some of the best selection of gourmet carts, are open into the evening and on weekends, and have beer. There is something for everyone from breakfast to dinner, sandwiches, soups, and dessert. And beer.

Michael Russell, restaurant reporter and critic, The Oregonian:
It’s hard to top the double whammie at Northeast 15th Avenue and Prescott Street, where Grain & Gristle — a beer bar with some serious, and seriously inexpensive, food — sits next door to Pok Pok Noi, a greatest hits album for Pok Pok fans. With a nice coffee shop, Extracto, and a wonderful bar, Tiga, in the same complex, neighbors have little reason to walk far for excellent food. Though if they did, they’re a short stroll from, say, Ciao Vito and Natural Selection on Alberta, or Ned Ludd the other way on Martin Luther King. Not bad.

Mike Thelin, Feast co-founder and Cooking Channel talking head:
Downtown. It made a comeback. Little Bird, Bunk, and now a new project on the way from Vitaly Paley.

Don Bourassa, community director, Yelp Portland:
I fail to see how any neighborhood can even come close to Inner-SE for 2011. There are some great things happening on Williams, though, and although Division is coming in strong for SE in 2012, the N/NE hood from Williams out to 33rd and Alberta/Killingsworth could put up a good fight.

Danielle Centoni, editor, MIX:
I'd have to say SE Clinton, since it now has great options for every meal of the day, from breakfast through late-night.

Peter Szymczak, managing editor, NW Palate:
The Industrial District continues coming up, with Hair of the Dog Brewery, Bunk Sandwiches, and Boke Bowl joining pioneers Clarklewis and Olympic Provisions, plus some of the city's best nightlife.

Tony Perez, food editor, Portland Mercury:
Clinton/Division, no question. It was solid before, but 2011 added St. Jack, Wafu, Sunshine Tavern, Woodsman Tavern/Market, Mi Mero Mole, Double Dragon to the mix. There's some excellent food carts, a few of my favorite bars, and another Andy Ricker project on the way.