As is the tradition at Eater, our closeout of the year is a survey of local food writers, industry types, and friends. We asked the group eight questions, and all will be answered by the time we turn off the lights on Friday. Responses are related in no particular order; all are cut, pasted and unedited herein. 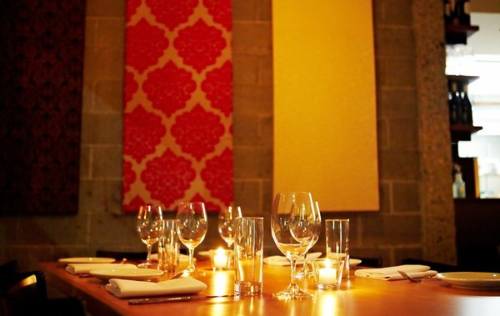 Image of Aviary courtesy Don B. via Yelp

Q: What are the top restaurant newcomers of 2011?

Peter Szymczak, editor, NW Palate:
Boke Bowl: Soup-bowls of fun.
Natural Selection: Serious vegetarian/vegan cuisine.
Woodsman Tavern: Straightforward, if spendy, yet quintessentially Northwest (except for the wine list).
Aviary: Appreciated the flavor combinations before the unfortunate fire shut them down. Looking forward to seeing them rise like a phoenix from the flames.

Don Bourassa, community director, Yelp Portland:
It would be a much shorter answer if you asked me which newcomers weren't tops. I dig St. Jack and Woodsman Tavern for sure, and on the vegan scene, Natural Selection. Boke Bowl's brick-and-mortar is up there too (I just wish they were open for dinner!), and I'm digging the explosion of upscale neighborhood-y joints like Interurban, Oven & Shaker, and the Box Social. Oh, and Aviary — even though they're in "do-over" mode.

Tony Perez, food editor, Portland Mercury:
I'm in the St. Jack camp, but Wafu, Aviary, and Otto (which has gotten steadily better since my first meal there, and has a not-to-be-missed happy hour) are all in the conversation.

Karen Brooks, restaurant editor, Portland Monthly:
So many new places are full of promise but still in shake-down mode. So far, Boke Bowl and Luce top my list. Mextiza has at least a handful of memorable dishes — and it's good to see depth in regional Mexican cooking, a glaring absence in Portland's scene.

Michael Russell, restaurant reporter and critic, The Oregonian:
This year has been so back-loaded with great openings, you could easily make a whole list of promising places that opened just in the past two months. Pre-October openings that have met their hype include Natural Selection, Wafu, the Rum Club, Sunshine Tavern, the Bent Brick, and Manao Thai. Of course, this shifted calendar allows me to include some other favorites — Grain & Gristle, Little Bird, and St. Jack — which opened in December of last year.

Mike Thelin, Feast co-founder and Cooking Channel talking head:
I love Woodsman Tavern. Portland needed that restaurant — it really ups the ante design-wise in Portland. It's such a nice space.

Brett Burmeister, chief food cart enthusiast, FoodCartsPortland.com:
I'm really excited to see the Ramen Truck and Minizo — two carts focusing on different styles of Japanese ramen. They have introduced me to a savory noodle dish that has nothing to do with a salty chemical packet and chalky noodles from my college days. Brass Tacks opened in my neighborhood this year. Some great sandwiches, house-made pickles, and welcoming owners.

Danielle Centoni, editor, MIX:
If we're not stretching the definition of 2011 to include the last weeks of 2010, then my vote goes to LucLac Vietnamese Kitchen. Of all the new restaurants I tried this year, and I tried almost all of them, that's the one that hasn't disappointed, especially the beef dishes.