Last night, local food folk (and those willing to shell out $85 per ticket) gathered at the Nines Hotel for StarChefs' "Rising Stars" Gala, a celebration thrown by the online culinary magazine to toast its previously announced Rising Star winners — aka those deemed "future leader[s] in the national culinary scene." In addition to the already-named Rising Star winners, StarChefs CEO/editor-in-chief (and self-proclaimed "Energizer Bunny") Antoinette Bruno announced winners in a series of PDX-specific "artisan" categories, getting MC help from Portland Monthly's Allison Jones.
1. The Artisan Winners: Water Avenue Coffee's Brandon Smyth, New Deal Distillery's Tom Burkleaux, and Lompoc Brewing's Bryan Keilty took home wins in the coffee roaster, distiller, and brewer categories, respectively, beating out a list of heavyweight nominees. And one more award was given out on-site: Vitaly Paley was recognized for his efforts to mentor younger chefs, and awarded a trophy that looked uncannily like a Vitamix. 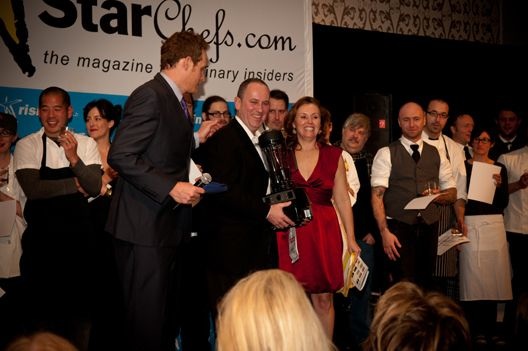 2. More people, winning things: Guests at the event had the chance to vote for their favorite bite of the evening (as each StarChef was forced to work the event and feed the hungry hordes). And the winning podium turned into a ladies' night of sorts: Naomi Pomeroy's maple-glazed pork belly took top honors, with pastry chefs Kristen Murray (Paley's Place) and Kir Jensen (The Sugar Cube) placing second and third.

3. Just one more award, seriously: Eater would like to dole out another unofficial award to Kurt Huffman, whose pants are deserving of a Special Sartorial So Hot Right Now Award. Runner-up in said fake category: Departure's Greg Gourdet, who was not cooking the event but stopped a few floors down to make an appearance.

4. St. Jack's Aaron Barnett was particularly flummoxed upon finding out that his mentor/former employer Gary Danko was in attendance, flying in from San Francisco to show his support.

5. Because this is Portland and Portland likes recycling, bites were dished up on dinnerware made from fallen trees (seriously, it's a thing). Guests also saw the return of a childhood cafeteria favorite: The spork, which made jabbing at some of the larger dishes a tricky endeavor.

6. After the tasting gala ended, the entire crowd shuffled over to Clyde Common for the official industry-only afterparty. Local meat purveyor NickyUSA shuttled its crowd over in a stretch Hummer limo, because eight blocks is a long way to walk and why the hell not. The limo, sadly, did not have a hot tub in it.