This is the recurring Eater feature Shit People Steal, in which we ask restaurateurs what items in their restaurant have been (or are frequently) stolen. 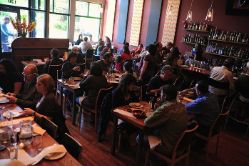 In addition to a 911 call every couple of weeks, NE's happenin' tapas spot Toro Bravo also sees a theft every fortnight, according to manager Renee Gorham. In addition to everything from candle holders to silverware to casuelas (the little ceramic dishes), Gorham says that restaurant thieves are in the mood to "keep a memory," as it were:

We lose about a pepper mill every two weeks — they're four and a half inch Peugeot Paris classic mills, and I think people are not necessarily looking for the excitement of being a thief, but they want something symbolic to remember their experience by. So sometimes I think it's a bit of an honor to create such an experience that they literally, physically, want to take something. Although please stop taking my pepper mills.


More personal items have been stolen. A piece of art that was hanging in the bathroom — and I'm not talking about a small piece, it was about two feet squared and hard to sneak out the back door with that; it was framed, glass. When John opened Toro Bravo, he was given an oversized book of Ferdinand, which is a great story and how the restaurant got its name — the brave bull Ferdinand — and he took the book apart and framed the artwork. It's a one-of-a-kind book that a friend of his found in Israel. So somebody literally walked out the door with that. A plate that he bought in Barcelona that hung on the podium had had a great picture of a bull, that was stolen just recently.