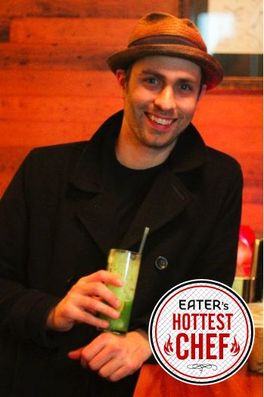 After more than two weeks of frantic voting and whittling things down from a list of 30 sexy chefs, we have a winner in Eater PDX's first-annual Hottest Chef Competition: Major congratulations in order to Blossoming Lotus' Wes Hannah, who is officially Portland's Hottest Chef 2011, after pulling it out in a nail-biting race with Portland's official Hottest Non-Vegan Chef, Chris Thompson (of Iorio).

But it's not over yet: Hop over to Eater National and represent PDX in the national search for the country's hottest chef. Winners from all of Eater's sister cities in New York, L.A., San Francisco, Austin, Chicago, and Miami will duke it out in a battle for hot chef supremacy: Consider it your civic duty to show some hometown pride and show those big boys who's boss.

The fine print from the tech side of things: There's actually no perfect way to determine whether cheating has happened or not — generally offices and sometimes whole buildings all have the same IP address, so we can't use that factor alone to decide. Instead we look at circumstantial evidence like how fast or regularly someone is voting, whether it looks like a script, and how many votes came from one IP address with no votes for the other contestants. So we do have a script that can give us details to tell us which ballots are likely to have been stuffed. Obviously, the system is not foolproof, and particularly tech-savvy folks can find ways to sneak a few votes through. But the script does account for votes-via-script-writing and other uncreative manic refreshing-type voting.

And believe it or not, Eater HQ determined that there was no obvious cheating during the PDX final round (making me a proud mama bear). Which means Wes pulled it out by a single vote. Which is pretty insane.
· All Previous Hottest Chef in PDX 2011 [Eater PDX]