Share All sharing options for: Portland Goes Four-for-Four at the James Beard Awards

So you might have heard that the Portland restaurant community had a killer night at last night's 2011 James Beard Awards. Portland picked up a major national award win (Gabe Rucker takes the Rising Star Chef Award, in his fourth nomination), and an upset of sorts over Seattle chefs in the Best Chef: Northwest category (with Andy Ricker's win). Coupled with two wins in the cookbook category announced Friday (Kim Boyce's Good to the Grain won the Baking and Dessert category, while Mark Bitterman's Salted: A Manifesto walked away with the Reference and Scholarship category), Portland took home the prize in each category it received a nomination.

Eater National was on the scene and has some hangover observations at the ready, but some PDX-friendly tidbits: 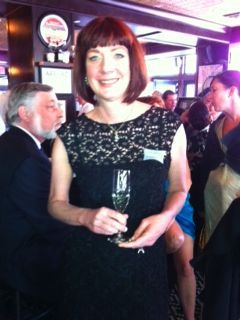 1) When asked why he wore purple sneaks with his tux, Rucker said it was because he was so nervous while packing that he brought two black left shoes. The official James Beard blog has a photo of said purple shoes.

3) Eater National reports that meatman Josh Ozersky was busy talking up his upcoming Meatopia 2011 event at the Beard afterparties, name-dropping 2010 Best Chef: Northwest nominee Naomi Pomeroy as a participant in this year's meatfest.

4) The Oregonian spoke to winner Andy Ricker on Sunday, the night before the awards, and report that Ricker considered a win unlikely. "If I did win," he told reporter Michael Russell, "it would be the most surprising thing in the world."