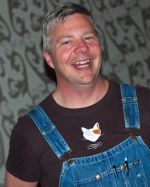 Third time's still a charm: During this weekend's annual Portland Iron Chef competition, reigning champ Adam Sappington of the Country Cat successfully defended his title, taking home the victory for a third year in a row. Sappington squeaked out a win against challenger Chris Thompson of SE Hawthorne's Iorio (Thompson also happens to hold the title of Portland's hottest non-vegan chef), with the two chefs using the secret ingredients of Greek yogurt, Guinness, and cherries in two courses cooked over the course of 40 minutes. Acadia's Adam Higgs took home the People's Choice award, setting up an Adam vs. Adam battle for 2012, but the real winners? The children: The throwdown raised thousands of dollars for PDX's Children's Relief Nursery. [EaterWire]