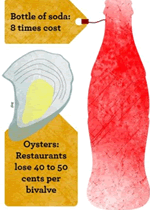 With the average restaurant's profit margins hovering around eight to 12 percent, proprietors usually rely on a few larger mark-ups to pay the bills. The San Francisco Chronicle crunches the numbers: Aside from the obvious alcohol mark-ups (wine by the glass is often marked up at five times the cost), big money makers include pizza (priced at six times the cost), some pastas (priced at up to 10 times cost), and soda (often marked up at 20 times cost). The biggest losers? Unsurprisingly, steak and seafood, two menu items where restaurants often lose money or barely break even. [SFGate via -E-]