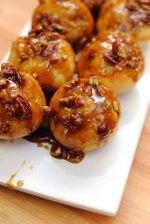 Cupcakes are the new cupcake. Eater has confirmed that Saint Cupcake will open its third location, dubbed Saint Cupcake Galore, on the corner of SW 12th and Morrison (in what was most recently a Three Lions Bakery). According an employee, in addition to cupcakes, the new bakery will offer an expanded menu focusing on both sweet and savory treats. Owner Jami Curl hopes to open by late June, adding to a bakery empire that includes stores in NW and SE Belmont. UPDATE: Eater's snagged a photo of one of those new items... behold the sticky buns. [EaterWire]