In his acceptance speech, Ricker gave props to his fellow Portland nominees and the city itself, saying that "The city of Portland has allowed us to do what we do. I just don't think that Pok Pok could have happened anywhere else the way it did." Immediately following the ceremony, Ricker will be on-hand to serve a sweet-and-savory steamed Thai rice cake at the post-show gala. Complete coverage and Beard wrap-up tomorrow! 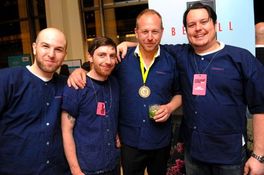