The winners of the 2011 James Beard Awards, the Oscars of the food world, will be announced tonight, and as you've undoubtedly heard, Cathy Whims, Andy Ricker, and Chris Israel are representing Portland in the Best Chef: Northwest category, taking on two competitors from Seattle. In the rare and completely unlikely event that a Seattle chef takes the title from our Portland trifecta, we've asked Eater Seattle editor Allecia Vermillion to fill us in about Emerald City competitors Ethan Stowell and Matt Dillon. Here's what she had to say about her hometown boys: 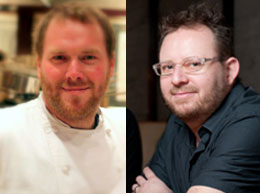 Seattle's got a few other names representing in New York City tonight, including 60-year-old institution Canlis, up (again) for Outstanding Service, and man-of-many-restaurants Tom Douglas who is nominated (again) for Outstanding Restaurateur. But for the second year in a row, the Emerald City was aghast to find Portland fielding more nominees in the Best Chef: Northwest category. But both of our contenders, Matt Dillon and Ethan Stowell are pretty dang strong, and everyone and their mom has bet on Stowell to take the award. Here's a helpful primer on who Whims, Israel, Andy Ricker are up against tonight.

Matt Dillon
Background: Dillon would actually fit in well in Portland; he made his name serving hyperlocal, unpretentious food in a tiny 20-seat space in a decidedly casual space inside an ugly strip mall. Last year he relocated his restaurant, Sitka & Spruce, to the hip Melrose Market complex. Dillon doesn't do much to seek the limelight, but he was a 2007 Food & Wine Best New Chef, the same year as Gabriel Rucker. His other restaurant, the Corson Building, occupies a charmingly dilapidated Italianate villa in the far-flung, industrial Georgetown neighborhood, is open just a few days a week and serves one set menu at its single nightly seating.
Why He's So Seattle: A longtime champion of nettles, fiddlehead ferns, and morel mushrooms; Dillon out-locals and out-seasonals most other chefs in a city where pretty much everyone cooks that way. He's been foraging long before it was cool, and for a while he did it professionally. For the love of god, the man has a tattoo of the state of Washington.
Why He Deserves to Win: Dillon personifies all that is good about seriously seasonal, local cuisine, and he does it in a way that isn't one bit pretentious or douchey.
The ideal Dillon meal: Dine at the Corson Building and you're eating whatever's on the set menu that night. At Sitka & Spruce the menu changes rapidly and you can't go wrong, though anything with foraged elements or heavy on grains best showcases his talents.

Ethan Stowell
Background: Born to a ballet family (his brother is artistic director of Oregon Ballet Theater), Stowell has become downright omnipresent in Seattle. He's currently got four restaurants around the city (after closing his flagship, Union, last year). Recently he released a cookbook and developed some concessions stands at Safeco Field. However he still says he'd rather be cooking on the line than anywhere else and it's not uncommon to see him in the open kitchen at his newest restaurant, Staple & Fancy.You can learn more about Stowell by reading this gajillion-word cover story from a recent Seattle Weekly.
Why He's So Seattle: Stowell is a champ at incorporating Pacific Northwest ingredients into Italian cuisine. There's no one else in town who knows his way around a geoduck like this guy.
Why He Deserves to Win: Stowell, a four-time nominee in this category, is the favorite of pretty much every Beard handicapper. He has put in his time with multiple previous nominations, and between his cookbook and assorted restaurant, the buzz runs high. Plus, let's face it, Portland might get more nominations these days, but Seattle always seems to bring this award home.
The Stowell ideal meal: If you happen to dine at any of Stowell's restaurants, you can't go wrong with a pasta dish, particularly his spaghetti with anchovy. However if you dine at his newest, Staple & Fancy, the family style set menu is the way to go.
· All Previous Ethan Stowell Coverage on Eater Seattle [-ESEA-]
· All Previous Matt Dillon Coverage on Eater Seattle [-ESEA-]