Introducing One Year In, a feature in which Eater sits down for a chat with the chefs and owners of restaurants celebrating their one year anniversary. 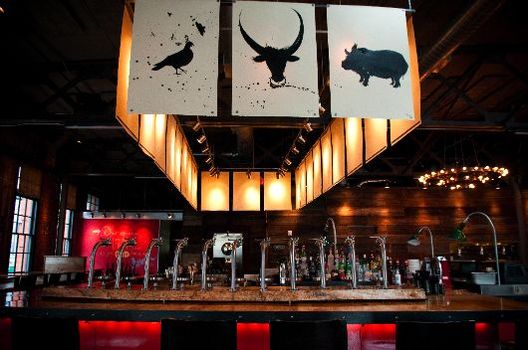 Last May, Portland's most-anticipated opening came with a bit of out-of-town glam, as noteworthy San Francisco restaurateurs Doug Washington, Steven Rosenthal, and Mitchell Rosenthal moved it on up to PDX to open a southern-tinged, fully American restaurant called Irving Street Kitchen (in tow, chef Sarah Schafer, who also made the move and has suffered gladly through Eater's transplant interrogations). Now, one year later, we caught up with Washington — who calls from his home base in SF — to see how things are going.

How did you first conceive of Irving Street and its concept, and why do it in Portland?
Well, we hadn't done anything out of San Francisco. But I'm from Vancouver, Canada, so I've spent time in Portland. And Mitchell, my partner, he also had spent time there in the past few years. We love that city and we love being there. And it got to the point where we thought, "To hell with it. Let's open a restaurant and it'll give us the excuse to be there all the time." How involved was Sarah in the concept of Irving Street? She was very, very involved. Sarah and [general manager] Ryan Dixon really, really run that place. I can't stress that enough — these two are like owners, and they have a lot of autonomy.

How did you land on that specific spot in the Pearl?
There was a certain amount of serendipity to it, because we had been talking about different areas — there was some interest in the SE, on Hawthorne, would we be interested in Mississippi? — and we kind of liked the funkier areas. And then we got approached by the people who owned the restaurant up there, Bay 13, who are from [San Francisco]. I don't know if they heard that we were looking at Portland, but they basically said, "Look, we want out. We have this long lease on this amazing space, and we really want out." I started spending time there [in the Pearl], and my nervousness at first was, Does the Pearl have this reputation for being somewhat... um...

Stuffy?
Stuffy. Or wealthy. Or whatever it is. We talked about this, and we started spending time there, and the bottom line is: You walk around the Pearl, and it's just beautiful. I like how there are new buildings, there are old buildings, there are little fleabag places, there are really nice places, there's cool little stores like Cargo — I could spend all day there. I like that the fact that it's dead-center to a lot of things, and then our job was to create a restaurant where we felt like people would be willing or wanting to cross over a bridge to come there. We feel like we've been really successful with that. I think that everyone who walks into Irving Street knows we're not a precious restaurant.

Did you look to any restaurants in town for inspiration?
We ate everywhere. I have to tell you, we ate and ate and ate. And the irony is that one of my favorite meals of the last 10 years has absolutely nothing to do with what we did. And that was at DOC. What they're doing out there I think is just unbelievable. ... We ate at Beast, we went to Olympic [Provisions]. We ate at Laurelhurst Market, which we loved. I could go on and on — we ate at Pok Pok a bunch of times.

We felt like when we were in Portland, it really fit us. It fit our sensibilities. And truth be told, I think it fits our sensibilities more than San Francisco. So, when we went there, we felt it was refreshing. We can bring our sensibilities to a place that's a little less precious. It's really community driven, people up there are relaxed and engaged, there's a great vibe. People welcomed us really quickly. You hear the horror stories: Oh dear god, you've come from outside to Portland and go through hell... I found that to be a bunch of bullshit. It wasn't like that at all.

Do diners have different expectations in Portland than they do in San Francisco?
To be honest with you, no. I think what I would say is Portland people are very excited about what's going on there, and they're excited not just about the cocktail culture — because that's just one part of it. I think they're really excited about what's happening with food and its tie to the land and its tie to the seasons. And I know that we have that here, but Portland people... they definitely walk the walk. On my third day open there, I had a busboy stop me because we had five garbage cans by the dish pit, and I threw something in one of them. And he pulled me back into the kitchen to explain that I had thrown something into the wrong container. I love how serious he was! People up there are really committed to what they do.

How did the opening go?
I really loved the opening. I had a great time; we were all there. The only thing that has taken place that has surprised me or that I wasn't ready for, was that there's this period where it starts to rain. And everyone kind of stays home for a month. And I remember Sarah laughing at me, because I remember being there and it was really quiet, and I thought, "Holy shit, this is the end. What happened? We were packed... and for a week now it's been quiet." I was like, is that what happens in Portland? Did someone else open? Did a bridge close? And she laughed, and said, "No, this is the start of the rain." And it literally want for like a month, and then business came back. And now it's really busy. Then when they introduced brunch, brunch has been packed.

Are there any specific areas where you think there's need or room for improvement? I don't think there's anywhere on the menu where we feel like, Oh, we really screwed up. I think you find that out in the first couple months. Anyone who tells you they opened a restaurant and kept the same menu as their opening is either stubborn and out of business or full of it. I think for us, we want to keep the prices reasonable, we want to keep the quality there, it's a lot of honing it down.

We [also] started this wine tap program where we've got 12 wine taps. And I wasn't sure how that was going to go over, because we had never committed so heavily to a tap wine program. So we spent a ton of money on the equipment just for the wine tap program, but to me, it fit so perfect because it's wine that is really fresh and incredibly eco-friendly — there's no wasted bottles, capsules, corks. ... We wanted to do it — put a dozen on — and then go get really serious wineries to do the program. So, Patricia Green is doing it, Chahalem is doing it, Andrew Rich, Stoller, Seven of Hearts is doing it... we've got Tyrus Evan out of Rogue Valley. There are just some really amazing people getting behind this thing, it wouldn't surprise me if next year if we add another 12 taps. We've got so many people from wineries calling us and saying they want to do this, there's no reason why eventually we wouldn't have all our wines by the glass available on tap.

What about another Portland restaurant?
If we were to open something else up there, I think I would open a small place. Very small place with wine on tap only. Wine and beer on tap, and that's all. Nothing out of a bottle, really focused. But we're so focused on Irving Street. We're not going to open... the only thing we would open is if... we have a side room that right now we use for storage. Who knows, maybe one day we'll take the door off that and turn it into a little wine cafe. But we're just really focused on what we're doing [now].

Does it feel like it's been a year?
No! It freaks me out that it's been a year. Although my kid, at breakfast the other day, told me that I look a lot older in the last year. She said, "Papa, you look really old. You have rings under your eyes like donuts." [But] it doesn't feel like it's been a year at all. It really doesn't. All I can say is that Sarah and Ryan, they've really made that place. And I think they're really amazing human beings. They work around the clock, and their commitment level is like nothing I've ever witnessed. They really make that place.
· All Previous Irving Street Kitchen Coverage [Eater PDX]