Welcome to another new feature, the Gatekeepers, in which Eater roams the city meeting the fine ladies and gentlemen that stand between you and some of your favorite hard-to-get tables. 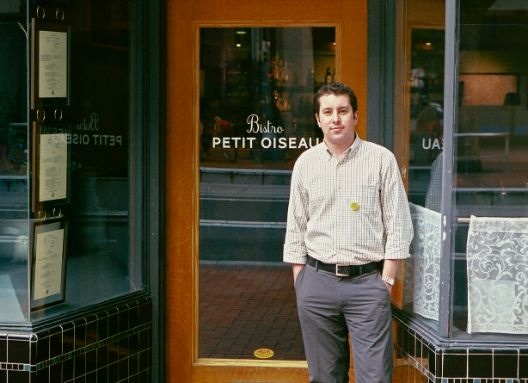 It's 8pm on a Saturday. How long is the wait?
One of the things we really wanted to do when we opened this place was to... try to set things up in such a way that you don't have to [make reservations]. That way, it's really like a bistro and you can just come in. Any given night, about half of the people that eat here don't have reservations. If you're a party of two and you walk in here at 8 o'clock on a Saturday, the wait could be over an hour, but it could be 10-20 minutes. If you're a party of four, five, six, you probably have a long wait. If you're just a couple people, we really do encourage people to just come by, because often, even if they couldn't get a reservation, they're surprised by how short the wait is when they get here.

What about the lunch rush?
Fridays are probably the busiest day, because at the end of everybody's week, they're a more inclined to play a little more and work a little less. On Mondays and Tuesdays, the ratio of iced tea and Diet Coke to wine and martinis is different than it is on Thursday and Friday.

Is there anything I can do to make my wait shorter?
Have a good attitude. A warm smile, a little understanding to your host is definitely going to subliminally put them more in your camp than a lot of demanding and pushing around. But that's probably true in every restaurant and store the world over. How about gifts or cash to speed things along? I've never worked in a restaurant where we haven't seen people try to either bluster their way in with name-dropping or with a little tip. And frankly, we in the restaurant business find that rather insulting. Just because you know this guy or that guy, it doesn't make you more important than the people who've already been waiting for 20 minutes. Sliding someone 10 bucks and expecting the world to change is kind of an insulting thing to begin with.

Tell us about your favorite regulars.
We're really blessed to have a lot of regulars, and the ones who are the favorites really enjoy food and wine the same way we do. The regulars that we really like are the ones that say, "We really like that chicken dish, but the new duck confit dish, I didn't love the way it was prepared." It's those people that give us the honest criticism that helps us get better... [and] that's the stuff that we really value. Their opinions are some of the best ways that we grow.

How about some celebrity diners?
Truth is, I don't know how many uber-celebrities I see in here. One of the actors from Mad Men was here for a few nights in a row, he must have been filming something. One of our waitresses was excited because one of the actresses from Twilight was here once. But not that many super celebrities stand out. I did have a guy call and try to get a table one time — I said we were full, and he told me his name was Barack Obama and asked if that would help. It would have worked better, except he had a really thick Southern accent. I will give the gentleman credit: Barack Obama was in town, but I'm pretty sure it was not him.

What about well-known chefs?
We thought it was pretty cool to see Grant Achatz here for lunch a few weeks ago. But we love to see other Portland chefs in town. That's always the most gratifying — to see our peers.

Tell me about the craziest request from a diner that you were able to accommodate.
[Long pause] I suppose I'm not easily fazed... The request can sometimes be crazy is that the lists of what people can and cannot eat are so long. So some of those can seem a little difficult, but we can always accommodate that. But as far as really crazy... No tourist buses park out front looking to seat 30 people? No, but I always joke about that... I don't know. People are people. I've had people say they wanted to reserve for 25 people, but "we don't have to sit together, you can just scatter us all over the restaurant." Which I guess isn't that crazy, but it is crazy for us because it doesn't work very well.

What are your favorite things on the menu here?
My favorite things on the menu here... for one, oysters. I love to start a meal with oysters. We have a celery root remoulade, a salad of raw grated celery root with a little carrot, lemon aioli, a little pepper oil, Oregon Bay shrimp... so it's just really crunchy and fresh. The duck liver mousse. Roasted marrow bones are kind of fun; they're delicious and fatty and good and give you that Flinstones feeling when they're in front of you.

What's your most important gatekeeper tool?
I'd say patience, but some people would laugh that I said that. I think people often talk about empathy, but I like to talk about advocacy. And I don't mean it in the common sense of being an advocate for a cause, but I want us to be advocates for our guests in terms of getting them the food they want, the wine they want, and the experience they want. Our goal is that when a guest sits down, they feel that we're on their side. The biggest thing is we're really gratified and honored that we're so busy, but we never want people to feel like it's exclusive. We might not apologize that we're full, but we do sincerely feel bad when we have to tell people that we can't seat them. But the fact is, if this was a 200-seat restaurant and we said yes to everybody, it wouldn't be the same restaurant.