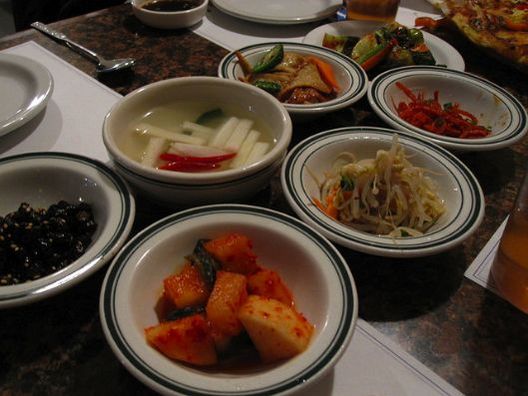 Benjamin Dyer (Laurelhurst Market, Simpatica, Ate-Oh-Ate) is one busy dude. But it seems this super-hot chef has just enough time on his hands to scout out some of our region's more curious dining destinations. Here's one of his recent finds.

"I stumbled on Country Korean Restaurant one day while heading out to Pal-Do Korean Market for some dried shrimp to make Saimin stock. I noticed the cheap banner hanging off the front of the space in the little strip mall and had to check it out. Upon entering, I was the only guest in the restaurant. There were two Korean women sitting at a table chatting and watching soaps on the television. One note: I love Korean food. I always have. It is quite possibly my favorite Asian cuisine. There used to be a little Korean restaurant in Eugene, where I lived for seven years, that I used to go to two or three times a week, every week. When they knocked the building down that it was in, a small piece of me died. One of my biggest disappointments in the city of Portland has been its dearth of good Korean restaurants. Plenty of restaurants, a dearth of good. And that's why I love Country Korean.

Dyer continues: "Now, I have read some of the reviews of the place — true, the service can range from lacking to nonexistent. They can forget items you order — that first visit, I was the only customer and they forgot the beer I ordered; they never came to refill my water. The ambiance is... lacking. Cheap posters on the walls but otherwise clean. Certainly not dirty linoleum and broken fluorescent lights, we've all seen plenty of that. Certainly presentable enough, but definitely won't win any awards for 'Most Romantic Getaway.'

[But} the food is good. It started with the banchan [kimchi] they brought out. Six or seven different kinds, some of the best I've ever had. There was an amazing turnip kimchi that had a delicate citrus flavor to it. The sweet black beans were great. The won bok cabbage kimchi was good. But my favorite was the sesame leaves. Just amazing. I had never had these before and I couldn't wait to have them again. They came in my Bi Bim Bop. Served in a stone bowl, sizzling and full of tasty goodness. Really wonderful, better than any I'd found in the city. As long as the food tastes like that, the rest doesn't even matter. They've got a wide variety of dishes to choose from, and there are a lot of options for the adventurous eater, liked steamed pig's feet and soondae bokkeum — blood sausage."
· Country Korean Restaurant [Willamette Week]
· All Previous Ben Dyer Coverage [Eater PDX]
· All Previous Dining Confidentials [Eater PDX]