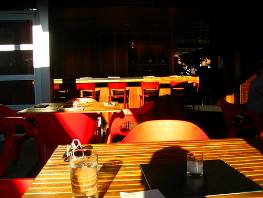 "Who would dare steal from the Yakuza? One would think, not many people. Yet good ol' PDX will always provide a rebel or two, especially after a night of drinking sake. A set of chopsticks here, a glass there, all things to be expected. Yet, the most coveted item Yakuza has to offer and the most frequently stolen item? The bathroom air freshener. Yes, we have fantastic taste in smells, but really?

They're simple free-standing air fresheners. Our downfall may have been positioning them right next to the door, near the paper towels. The incident that really stays with me was one night two women came in asking for a table for four. Both women went out back, toward the bathrooms, but only one went in. After an uncomfortably long time, the woman exited and walked straight out of the restaurant, followed closely by her partner in crime. I checked the bathroom our after they left. It smelled overwhelmingly like baby powder, and our non-baby powder air freshener was MIA."