Thieves Rip Off Garden State's Metal, with a Side of Meatballs

Share All sharing options for: Thieves Rip Off Garden State's Metal, with a Side of Meatballs

Welcome back to Shit People Steal, in which we ask chefs and restaurateurs what items in their restaurant (or food cart!) have been (or are frequently) stolen. 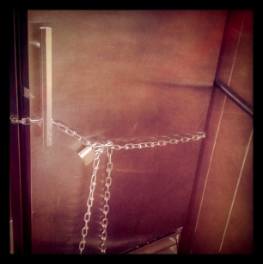 Garden State (and Burgatroyd) cart owner Kevin Sandri has had the lovely distinction of having shit stolen in both neighborhoods where his carts have been parked — Sellwood and N. Mississippi. And thieves in each locale have decidedly different scores in mind:

You wouldn't think this would be the case, since it's such a nice neighborhood, but the competition amongst the canners [can collectors] in Sellwood was intense. Every day I would encounter two or three of them, emptying my recycling bin, making small talk, hoping to find the best time to come by for the biggest hoard. Of course, this isn't stealing, but I can't help thinking that some of it was casing. The original quilted-steel Garden State cart was nothing but shiny metal, and if the canning wasn't so hot one day, it must have gleamed like money at night.

Thieves ripped off pieces of the hood vent, the entire service shelf, even the fold-down step to my door. Sure, I also had the more typical disappearances — hot sauces, salt shakers, a laminated picture of Italian street vendors selling spaghetti and clams, a patio chair or two — but this was some Mad Max kind of shit! I suppose I was warned, when on the very first night I parked the cart there, it was tagged, the graffiti reading: "fancy." Come and get it!

Since I've moved to N. Mississippi, I've had very few problems like this. Which is odd when you consider that the guy who cleans my hood vent at first refused to come to the new location. A native Portlander, he hadn't been here in 15 years, and when I gave him my new address he thought I was kidding. But the only time I feel a little sketched-out these days is when I get to the cart real early, when the tweakers who've been up all night are cruising about, all-to-eager to introduce themselves.

No, the only thief up here came for the real goods. As far as I can tell, this one came twice. The first time, they took nothing, which led me to believe they were only looking for cash. I put the door back together as best I could, thinking it was an aberration. I'd been up here over a year by now, and thus far nothing like this had happened. Then they came again a few days later, and I realized what they were after. This time, we had some leftover meatballs in gravy in the fridge, and they took the whole pan. This thief understood value; he left the tin of saffron alone.

Have a restaurant theft story? Email us at pdx@eater.com