This is the Gatekeepers, in which Eater roams the city meeting the fine ladies and gentlemen that stand between you and some of your favorite hard-to-get tables. 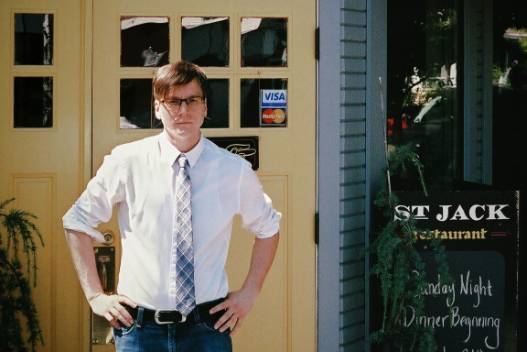 According to Joel Gunderson, general manager and sommelier at SE's still-buzzy St. Jack, the spot's success has come as a result of some strong partnerships. "Chef [Aaron Barnett] and I have been talking about this restaurant for six years," Gunderson says. "I've worked with him at two different restaurants, known him for 10 years... there's just a lot of love on my part for what he does." Since opening in late 2010, Barnett and Gunderson's carefully planned bistro (aided by Kurt Huffman's involvement) has hit the ground running — and reservations have become even more coveted since the Oregonian named St. Jack its "Rising Star Restaurant of the Year."

It's 8pm on a Saturday. How long is the wait for a table?
It varies. Right now, with the outside tables, we have a lot more to offer people as far as not having a reservation — all of the outside tables are non-reservable. You might be able to sneak in at 8 o'clock... but there's two eight o'clocks. There's eight o'clock and there's 8:15. And if you get here at 8:15, a lot of times, the wait is gonna be an hour and a half. It might be long, but we have different experiences to offer. The bar is one of my favorite places to sit in this restaurant, and for a party of two at 8pm, you can sneak into the bar. ... Honestly, right now, we're fully booked for Saturday. We do try to strategize our night so it's friendly to the kitchen, but also give opportunities for people who don't have reservations. Really, the most important thing is that once we seat you, we want to give you that great experience.

Is there anything I can do to make my wait shorter? Like bribes, for example?
No. Absolutely not. We only have so many tables, and if it's full, it's full. I'm not going to lean on a table, compromise someone else's experience so you can jump in a little earlier. I already encourage my servers to take control of dinner service, so we can meet the promises that we've already made to reservations. It always pains me when someone has to wait a little for a reservation they've made — it does happen. So, I feel like my staff is already trained to guide tables through an experience. I feel like we're doing the best that we can do for whoever's coming through the door.

Do you have favorite regulars?
Absolutely. We have people who have been here from our soft openings through now. Regulars are your VIPs in a way. You get to know them, you have a personal relationship with them. In the past, it's always been any type of people — whether they're someone who's hard to get along with at first and then you develop a relationship with them, and you find out who they are as an individual... It's fun to see certain regulars expand their palate or expand their taste; watching them drink through your list and get excited about the stuff you're excited about. Or someone that started coming in ordering the burger and is now ordering the pied de cochon.

You mentioned VIPs. Have there been any celebrities?
We've had local celebrities, a lot of [nationally known] musicians through the door. [Ed note: Ever the professional, Gunderson declined to name names because] some of them live in the neighborhood. But they've all been lovely. Even some of the national, bigger names, didn't expect the VIP treatment, they were just coming in to have a good time with their friends. What about other celebuchefs? We see local chefs every night, absolutely. We've seen tremendous support from the industry. A lot of them like the bar, and Monday nights are a big industry night here.

Have you gotten any crazy requests?
We haven't received too many. Either you can meet a request, or you cannot, and if I can, [I will]. If someone walks through the door and they really want a Heineken — we don't carry Heineken, but there's a New Seasons Market two blocks away. I'll send somebody to grab them a Heineken and bring it back to the table. I've done that before. I've had one situation which was really interesting — I had a party of six and they couldn't get in as six, so they made three separate "tables for two" reservations. They didn't even tell me, I noticed it — so I just kept an eye on it and eventually put them together, playing with the layout. It wasn't an outlandish request, but I thought it was an interesting format. I thought, Oh my goodness, you want to come here so badly that you're willing to separate into three parties? Let's see if we can do something for you.

So when you're not here, where are you eating?
Pok Pok. Pok Pok take-out. Pho Oregon up on 82nd. I live up on 82nd — but I have two kids, so I don't go out to eat. [Laughs] I'm at home cooking, and when I'm cooking at home, it's mostly pan-Asian. I grew up in the Philippines, so a lot of adobo, pancit, sinigag.

Basically a 180 from what you serve here, then.
But you can pair a lot of the same wines with it, interestingly enough. Gamay Noir, Boujelais, is perfect for Asian cuisine: It has a little tartness, black pepper, a little gaminess. If you have read wine with good acidity, you can pair it with some heavier Asian dishes.

So, what's your most important gatekeeper tool?
Honesty. I think it's really important to be honest with customers up-front. I think people appreciate that. One funny phone call I had, someone called and asked for a reservation, and I said, "I'm sorry I don't have anything available until 9 o'clock." And he said, "You must think really well of yourself, then." I could tell he thought I was lying! Even though somebody might want something really bad at that moment, if they were the other customer, they would want to be treated the other way.

Honesty works well for us. We tell people how long the pied de cochon takes; we tell them how long the bone marrow takes. For larger parties, we insist on controlled menus so that they can have a good experience, so that our other guests can have a good experience. I think being up front initially with people allows them to know what to expect. Right now, being gouged and being lied to are things that consumers are really scared of: That phone call was case in point.