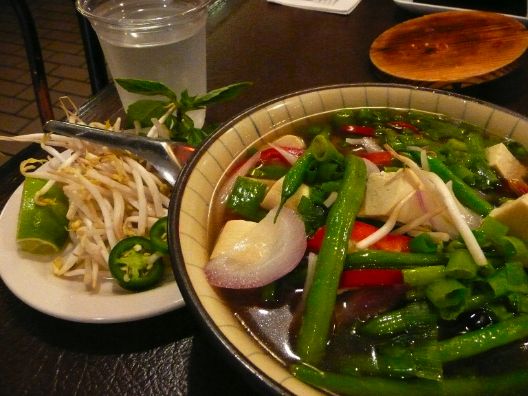 If you're ever in need a late night food recommendation, there's no one better to ask than a bartender. Dave Shenaut, a barkeep at McMenamins' Zeus Cafe, President of the Oregon Bartenders Guild, and founder of Portland Cocktail Week — which is coming up on October 20-23 — shares his favorite place to fill up when the bars close.

"When the bars let out, I head over to Pho PDX in the food mall on SW 2nd Ave (near Taylor St). On Friday and Saturday they're open till 4am, and diving into a bowl of pho is the best way to end a late night. I order the steak and lean brisket pho — it's perfect, really brothy with the right balance of warm spices, noodles, and lots of broth, with super fresh ingredients. I also order a side of sour cream puffs, soft and chewy on the inside and crispy and fried on the outside. They come out really hot and will explode, but they're so good it's impossible to wait for them to cool down. The owner Adam works the late night shift and puts a lot of love into the food and service. Order from him at the counter, then head upstairs and they'll deliver to your table. For a bartender that gets out at 3am the options are usually limited to fast food, so to be able to get great food served by people who care is amazing. Even as a cafeteria-style restaurant, you feel well taken care of, the hospitality is excellent. I'd say it's Portland's best kept secret."