This is One Year In, a feature in which Eater sits down for a chat with the chefs and owners of restaurants celebrating their one year anniversary. 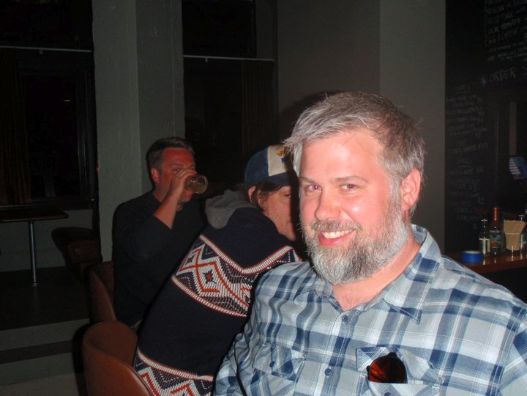 Last August, Tommy Habetz and Nick Wood, the dynamic culinary duo that co-owns the outrageously successful and wait-in-line-worthy Bunk Sandwiches, joined forces with the more musically minded Matt Brown to create Bunk Bar. Now, after a year of serving their much-lauded sandwiches, liquor-y libations, and super-secret music shows to the masses, Eater checks in with Tommy to see how the first year in Bunk Bar biz has measured up.

What made you decide to expand? And why a bar?
I had wanted the sandwich shop to be a bar in its original vision — a "sandwichy hangout bar kind of place" — but it naturally morphed into more of a "sandwich dinery shop." We were doing everything out of that tiny space on SE Morrison and pushing the limits of our building, so it didn't make sense to stay open for several more hours a day. I didn't want to force it and I didn't want to be open at night on Morrison. When Nick and I opened the sandwich shop we had no money at all. [But] people dug what we were doing pretty much right away and in the first six months we did [the Food Network's] Diners, Drive-Ins & Dives. We were crunched for space and we knew we had to expand, or at least, get a prep kitchen. That's when we decided to do the bar.

Why this particular neighborhood?
I was here for the opening of Clarklewis and I had always liked the area. I knew the Beam Development building owner, Brad Malsin, since my days at Ripe and had always had a good relationship despite what happened . He made us an offer we couldn't refuse and its a great spot.

How did the opening go?
Great. Nick and I wanted to partner with Matt Brown, and we knew that music was going to be a very important component to the bar. We are really big music fans and, last year, we started just in time for MusicFestNW. That cemented it for us. MFNW director Trevor Solomon [who, alongside Brown, books many of the bands that play at Bunk Bar] has been told by bands that we have the 'best green room in the country'... which is, in fact, our kitchen. Bunk Bar is a non-traditional music venue, our sound is good, and we feed our bands really well. We have local bands on Tuesday night and national touring acts two or three times a month. For this year's MFNW, we have a "secret show" on closing night.

How have you built up your bar program?
We aren't trying to build it up. We are just trying to be a good bar. We don't employ mixologists or chef bartenders.

Has Bunk Bar met all your expectations?
Yes — and exceeded them. The fact that customers dig what we are doing... the mural on the wall by Casey Burns... and the music... it all works for me.
#&183 Bunk Bar [Official site]
· All Previous Bunk Bar Coverage [Eater PDX]
· All Other "One Year In" Coverage [Eater PDX]