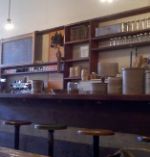 McMinnville chef Eric Bechard, whose restaurant Thistle was named the Oregonian's Restaurant of the Year earlier this year, has sold his stake in the neighborhood spot Community Plate, which opened in April. According to a press release, business partner and former Dundee Bistro GM Scott Cunningham, previously the owner of 50% stake, is now the sole owner of the restaurant. No word yet on who's running the kitchen. [EaterWire]