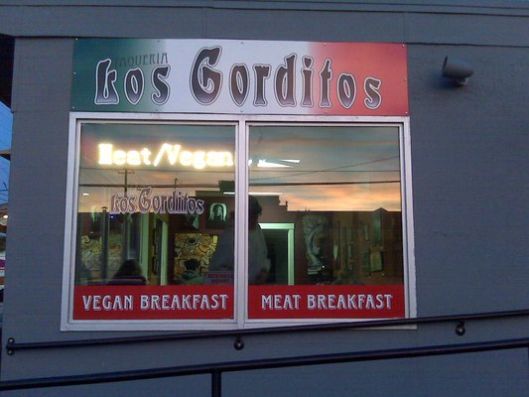 Under the tutelage of Thomas Keller for 10 years, Michael Hanaghan developed a taste for big flavors (and charcuterie — Hanaghan subsequently implemented the first charcuterie program within the Thomas Keller Restaurant Group). Upon his return to Portland in 2009, Hanaghan eventually became the executive chef at Ten 01 before becoming the chef at Brasserie Montmartre. That's where he puts his American touches on a French brasserie menu, with an eye on those big flavors that hearken back to his Keller days. But when he's not knee-deep in oysters on the half-shell, Hanaghan loves nothing better than getting a tongue-lashing at his favorite Southeast hide-out:

"I found out aboutTaqueria Los Gorditos about a year-and-a-half ago while I was living on SE Division [the restaurant also has a food truck at 50th and Division]. Having lived in California I always had three to four great authentic Mexican restaurants to choose from. As I was wandering down Division one day I saw this kind of shady-looking restaurant with no signage and very weird hours posted on the door. I had to try it... and was hooked after that. We probably go once every two weeks, especially now that we live in NE. And I always get something with lengua. Lengua torta, burritto or queso taco. The tongue that they do there is the best I've ever had. So tender. The juices from whatever they braise it in is so flavorful... And the vibe is great. Really laid back with local art work on the walls that's for sale. They have a large outdoor patio for these great summer days. And they are dog friendly... we take our Staffshire terrier mix, Kona. We've gone so many times that the (staff) actually knows us by name and even what we order. The only down side is that they are cash only."

On Sunday Nights, Berlu Will Turn Into a Pop-Up Wine Bar