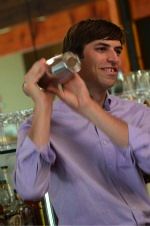 FoodDude reports this afternoon that bartender Kelley Swenson (an alumni of the Pearl's Ten 01) has left the stick at June, the E. Burnside hotspot he helped open with chef Greg Perrault in August of last year. Swenson, long considered one of Portland's top bartenders, told Portland Food & Drink that "right now I am just taking some time off to figure out my next move," though the Dude reports that "speculation around town is that he wants to open his own place." More info on that last part, as it becomes available. [PF&D]