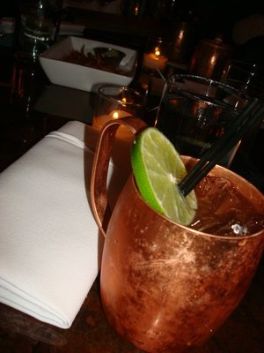 In this edition, Gilt Club owner and multi-city restaurant veteran Jamie Dunn has seen it all when it comes to thievery. "Over the years I've had pepper mills, art hanging on the walls, chairs, cutlery, flowers, a never-ending theft of the soap dispensers in the bathrooms — literally every other month or so; I don't know why people like them so much, I just buy them at Target," Dunn says.

Of the most notable Gilt Club thefts, velvet ropes and vintage records stand out as unique heist items: "In Chicago and here I used to have a stanchion at the end of the bar to keep people from standing in the wait station. No one ever stole it in Chicago, but within our first year here someone made off with it. The one the bothered me the most recently was some degenerate on a First Thursday stole my 'how to break dance' album off the record player in the bathroom."

But what Dunn couldn't have predicted: The Oprah effect. After Ms. Winfrey proclaimed her love for Moscow mules on her show (dubbing it the official gal-pal drink between BFFs Oprah and Gayle King), Dunn's found it harder and harder to replace the ones people steal:

There's been no uptick on mug theft [since the Oprah mention] — people having been treating them like 'souvenir cups' since we opened. Trouble is before Oprah I could buy them for $3-5 a piece on eBay. Now I'm lucky to find them for less than $10 each.

Image of the copper mug courtesy Ron T. via Yelp