While vegetarians did their VegFest thing at the Convention Center this weekend, meat-lover high-tailed it to Welches, Ore.'s Resort on the Mountain for the 11th annual Wild About Game cook-off, an all-around celebration of gamey meat thrown by local purveyor Nicky USA. In the "mystery ingredient"-style competition (each chef randomly drew a different kind of meat to use), Metrovino chef Greg "Wacky" Denton took home the top prize for his s'more-inspired duck dish, which featured (deep breath, folks) duck, charred wrapped giblet sausage, toasted foie gras marshmallow whip, cocoa sauce, graham cracker struesel, and campfire smoke (presented to the judges under a glass bowl).

1. Judging — handled gamely by Saveur food editor Dana Bowen, cookbook author/game expert Janie Hibler, and Eater's very own national editor Raphael Brion — came down to the wire, with Denton pulling out the win over Beast's Naomi Pomeroy by a single point. (In an "aww" moment, Pomeroy announced that "there's no one I'd rather lose by a point to than Greg" upon accepting her prize.) Third place was a tie between Urban Farmer's Matt Christensen and Little Bird's Erik Van Kley.

2. In what will affectionately be referred to as the "zoo box," judges sampled all nine dishes from within a totally-silent, enclosed glass room, with spectators looking in from all sides. Other appropriate comparisons for judges' box: An airport smoking lounge, and that plastic prison that housed Magento in the first two X-Men movies: 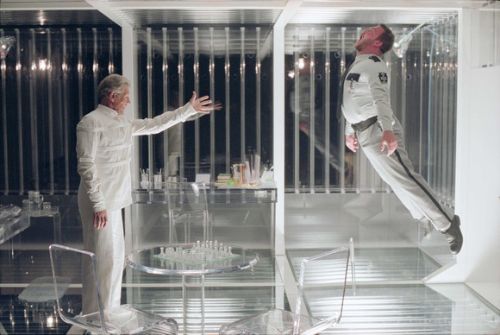 3. Last year's winner, Le Pigeon's Gabriel Rucker, worked the room with the ultimate accessory: His two-month-old son, who tasted foie gras for the first time at the event.

5. Team Aviary was on the scene, and though there's no update as to when the fire-shuttered spot will reopen for good, chef/co-owner Kat Whitehead says that additional pop-ups are on the menu: Including an upcoming one at Genoa.

6. Pok Pok's Brendan Newall and J. B. Tranholm whipped out the mortar and pestle to get all onomatopoeia with cilantro root at their demo, which showed off Pok Pok's famous wild boar collar. Spotted in the audience: Castagna's Justin Woodward , Tabla's Anthony Cafiero, and lots of Maker's Mark.