Welcome back to One Year In, a feature in which Eater sits down for a chat with the chefs and owners of restaurants celebrating their one year anniversary. 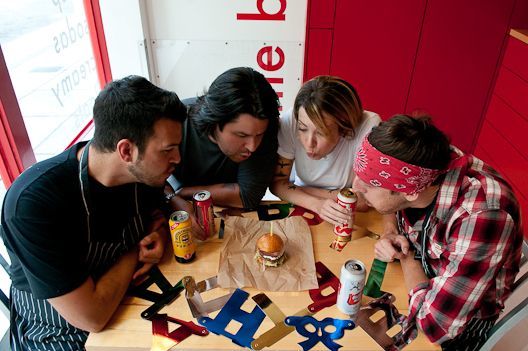 Little Big Burger owners Micah Camden and Katie Poppe have had a hell of a year. After (finally) opening their Pearl District not-quite-a-slider shack in September 2010, rumors immediately began swirling about ambitious expansion plans that ultimately saw the duo open a location on N. Mississippi in June, and ink deals to open LBBs in Southeast Portland, Eugene, Ore., and Los Altos, Ca. Eater sat down with Camden and Poppe to talk about their burger joint's initial growing pains, meteoric rise, and future expansion plans.

How did the concept of Little Big Burger come about, and what were those initial conversations between you two like?
MC: Yakuza had won best burger, and it's always been at the top of the rankings. When the economy tanked and I started watching all the money go down — Yakuza, Beast, and DOC at the time were all really nice restaurants; they were not cheap — I thought, I've really got to do something. The fast-food burger is essentially a quarter pounder, and I didn't want to come out with quarter pounder that everything was doing; I didn't want to put a slider on there, so it was more along the lines of, "Let's just make it a short man burger." It wasn't like an epiphany moment.

Why keep the menu short and sweet?
MC: The biggest inspiration was In-N-Out. Their menu is bare bones. When you go to a burger place — people would make pilgrimages to Yakuza just to get the burger, and nothing else. I'm like, screw it, if we're going to do the burger, let's just do the burger. There's very few things a burger needs: It needs fries, it needs ketchup. That's about it. And beer. Soda for the kiddies.
KP: We also felt like there was a lack in the market for a quality inexpensive burger. We thought people would be willing to pay a little bit more for a fast-food burger if it was made with really quality ingredients. Kind of like taking Burgerville to the next level: We can make really good, locally sourced, delicious fast food, quick.

Any reservations about being too simple?
MC: In the beginning, I had a few other things that at the least moment, I was like, "Do a put a little chicken sandwich on the menu?"
KP: Little Big Chicken, Little Big Fish... I kept fighting it. We were building it out, looking at all the equipment — you have to have a lot of different equipment to cook fish, chicken, and veggie burgers, meat burgers, and the whole goal was the keep it as simple as possible. The simpler it is, the easier it is to replicate, and the easier to keep the quality consistent. If you're trying to cook different meats at different temperatures all the time, quality might suffer.

Do people come in asking for chicken sandwiches and stuff?
KP: Every day.
MC: People come in all the time and are like, “Is this all you got?” But [they stick around]. Usually nobody walks in and walks out.

Let’s talk about all those opening delays. I remember covering this last year and having the date constantly pushed back... what was the reason behind that, and were there other unexpected things that happened during opening?
MC: We came down here — I've opened up four other restaurants like that — and I didn't realize [that downtown] there were design reviews for roofs. I thought I was going to go in and throw this hood in; when I got into city building, they said "We need 16 weeks to review your hood." When there's residences that can view your roof, you have to go through a process. So I said, screw it, and decided to go with a custom-made thing which turned out to be the reason for all the smoke after we opened. After about three months, we got it tweaked. The first couple days, it was barreling smoke. People were inside with respirators.
KP: It was like being inside a grill. It was a little too much of a hands-on experience for everybody.
MC: I walked across the street — this is three days after we're open — there's a line out the door and smoke barreling from the front door. It looked like it was on fire. I was waiting for someone to call the fire department.

Is there a stereotypical LBB customer?
MC: There's a good mix of everybody down here. One day, I was talking to Sam Adams and he was looking at the line forming out the door — and he was like, "There's a pimp, and a ho, a student, and a grandma, soccer mom'... Wait, he actually said that? Yeah. He's cool like that. He was like, "You guys reach the entire swath of people." They're all in line together, and they're all sitting and mixing together. You get a grandma bouncing to Jay-Z, it's like, that is so awesome.
KP: Literally anyone with $2.75 in their pocket can come in and get good food. It's really cool to see people of all walks of life and mingling with each other.

At what point did you start thinking expansion?
KP: It was always designed to be replicated. That was always the intention, to get it in a key location with the most exposure, and then pending success, make it so it's basically an insert. It's designed to be in a box, and you can insert it into any desirable location. It's super cheap to build out compared to most restaurants, it's super-easy to run; the inventory list is like half a page. It's all about simplicity, doing one thing and doing it really, really well.
MC: The thing is, we didn't start looking, people started approaching us. We opened up and people thought, "Those lines aren't going to last." But three or four months later when they're still there, people started approaching us with "I've got this building over here" or "I've got this much money."
KP: From day one, people started asking if this was a franchise.

When you opened here a year ago, did you ever think expansion would happen this quickly?
KP: No. We were thinking one a year. At that point, that was fast. And now we're going to be...
MC: Three a year. Three or four.

Do you ever worry that maybe it's going too fast?
MC: Yeah, sometimes. But for the most part, we feel ilke there's enough of a demand in certain areas. We're not going and opening up next to another place. We're going to set in a few places to get our foothold and let them mature. But if you don't expand at the rate of demand, your'e going to end up with a bunch of people who are going to copy your idea. I didn't invent the burger, but this concept seems to work. We've had the Five Guys executives in every two or three weeks, sitting there and eating. The Fatburger guy flies up all the time. He has like 100 locations, and after the seventh or eighth visit — this was a few weeks ago, and he's sitting there like, "I just don't get it."

So you're saying four or five restaurants a year... five years from now...
KP: Oh, no, five or six is going to be our cap.
MC: We won't open more than six. At a point, you lose touch. There's no way I can manage that. But we did get a serious reply from someone in Abu Dhabi. They called us and are like, "We have lots of money." I'm like, "I know you guys have lots of money." I'm not going to Abu Dhabi.

One final question: What's your favorite burger?
MC: In-N-Out.
KP: I would tie mind with Shake Shack, honestly. I'm from California, so I grew up with In-N-Out, but I was very impressed with the Shake Shack burger. It's different — it's hard to say one is better than the other.